The Atos and the Science and Technology Facilities Council (STFC) Hartree Centre Joseph Fourier Prize is a competition for scientists, applying individually or in teams to their local competitions

The Joseph Fourier Prize aims at rewarding the work of researchers, academics and industrial scientists in Quantum Computing.

In order to stay at the forefront of innovation and remain competitive, public organisations and enterprises will have to understand how to effectively harness this emerging technology.

Through this competition, Atos is supporting innovation in Quantum applications including communications, computation, simulation, sensing and metrology that will lead to tangible industrial applications within our lifetime.

The Atos Joseph Fourier Prize was first launched in France in 2009 by Bull, and is now launching in the UK in partnership with the STFC Hartree Centre.

The prize pays tribute to mathematician Joseph Fourier whose work in the 18th century largely contributed to the mathematical of physical phenomena of heat flow.

Scientists, academics and researchers can now, individually and in teams, register their projects in Quantum Computing.

The competition is running from 7th September 2020 to February 2021.

The 2nd and 3rd will receive 3 days access to the Atos and Hartree QLM system which can be used for developing quantum algorithms.

Main milestones for the competition in UK: 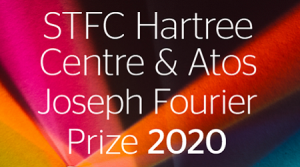 Register for the UK edition

STFC Hartree Centre: Our partner in the UK & Ireland

The Hartree Centre is transforming UK industry through high performance computing, data analytics and artificial intelligence (AI) technologies. Backed by over £170 million of government funding and significant strategic technology partnerships​ with organisations including Atos​, the Hartree Centre is home to some of the most advanced digital technologies within the UK. As a centre within the Science and Technology Facilities Council (STFC), part of UK Research and Innovation the Hartree Centre works with industry and the research community to address real life challenges and accelerate the adoption of high performance technologies, delivering transformative gains in performance, productivity and time to market.