Atos celebrates double gold at Women in IT Excellence Awards 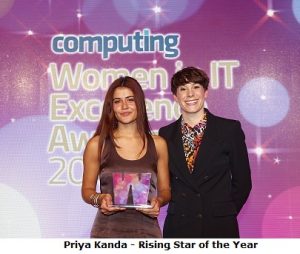 London, 28 November 2019 – Atos, a global leader in digital transformation, has secured two gold awards at this year’s Women in IT Excellence awards.

The evening saw Atos UK and Ireland, a Times Top 50 Employer for Women, celebrating its young talent with Mary Kirby named Graduate of the Year and Priya Kanda taking home Rising Star of the Year in the ENT tech category.

The Women in IT Excellence Awards celebrate and promote female talent in the industry, highlighting the positive impact of diverse teams within organisations. Now in its third year, the awards, which were held at The Brewery in London last night (27 November), have celebrated the achievements of over 500 women so far, inspiring the next generation of technology experts. 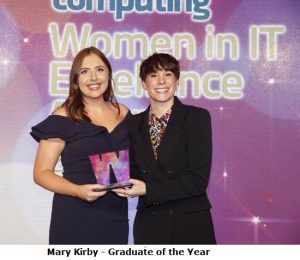 Nikki Kelly, Senior Vice President Public Sector and Health for Atos UK and Ireland, said: “At Atos, we have a clear objective to achieve real and lasting gender parity, promoting a culture where all employees thrive based purely on talent and so we are immensely proud of each of our outstanding nominees and our winners at this year’s awards. Particular congratulations must go to Mary and Priya for being named Graduate of the Year and Rising Star of the year respectively.”

Atos places a strong emphasis on being an inclusive and ethical employer through its diversity networks initiative to recognise, develop and raise awareness around diversity and inclusion in the workplace. AtosAspire supports the attraction, retention and progression of women. The network also focuses on generational and cultural diversity, ability, LGBT+ and ex and serving members of the armed forces, to ensure a productive working environment based on talent.

Atos is a global leader in digital transformation with over 110,000 employees in 73 countries and annual revenue of over € 11 billion. European number one in Cloud, Cybersecurity and High-Performance Computing, the Group provides end-to-end Orchestrated Hybrid Cloud, Big Data, Business Applications and Digital Workplace solutions. The group is the Worldwide Information Technology Partner for the Olympic & Paralympic Games and operates under the brands Atos, Atos Syntel, and Unify. In the UK & Ireland Atos delivers business technology solutions for some of the country’s largest public and private sector organisations. Atos is a SE (Societas Europaea), listed on the CAC40 Paris stock index.