On 31 October, 16 members of the Atos Armed Forces Network and volunteers spent the day selling poppies for the Royal British Legion 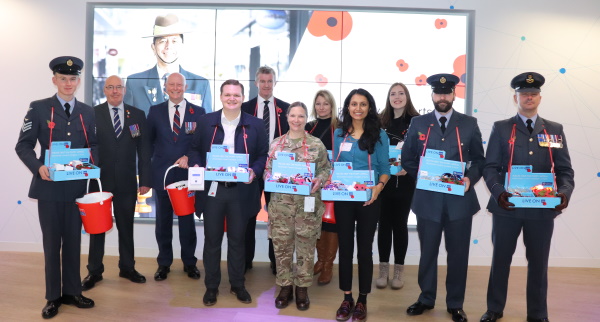 at Chancery Lane and Great Portland Street tube stations and around Atos’ London office for London Poppy day, an event that is the largest single-day street collection of its kind in Europe.

Atos veterans and reservists from our very own Armed Forces Network (AFN) linked up with members of the Graduate, Intern and Apprentice (GIA) Community and were supported by serving personnel from the Army and the Royal Air Force. All the volunteer collectors were invited to an event afterwards organised by the Royal British Legion in Leadenhall Market to celebrate their efforts.

Gavin Thomson, SVP Private Sector and BDS UK&I, said: “London Poppy Day is a fabulous opportunity for members of the AFN to support the men and women who serve and who have served in our Armed Forces. Everyone who takes part is always humbled by the support and generosity the British public show towards the forces through donation to the Royal British Legion. Congratulations and a huge thank you to our volunteers who took part and raised such an overwhelming amount.”