The Changing Face of Technology: Female university students and graduates join Atos in our London HQ 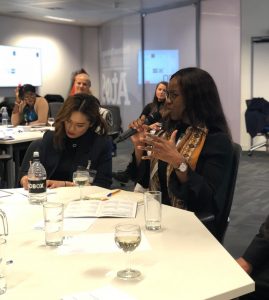 On Thursday 1 November, Atos UK & Ireland saw its first collaborative event between two of its diversity networks. The Together Network (celebrating multiculturalism) and AtosAspire (gender network) hosted a joint workshop in our London office called The Changing Face of Technology. The event aimed to encourage female students of a BAME (Black, Asian and Minority Ethnic) background and facilitate discussions around a career in the technology sector. Around 20 students from London universities joined us, along with Atos employees who shared their experiences as leading professionals within the organisation. The event allowed employees and delegates alike to meet and build a valuable network of individuals engaged within the technology sector.

The event also served as the launch of a new, exclusive mentorship program, and delegates were given the opportunity to join. Over the next four workshops they will engage in structured sessions with their mentors to support applications in the ever-changing field of technology and receive vital workplace skills.

Kemi Iyaniwura, co-chair of the Together Network, said: "The event was the first time we have come together with another network and its success demonstrates the importance of intersectionality in diversity and inclusion work. It was fantastic to meet such inspiring and exciting women, and I look forward to following their successes on the mentoring scheme."

Find out more about AtosAspire and The Together Network.