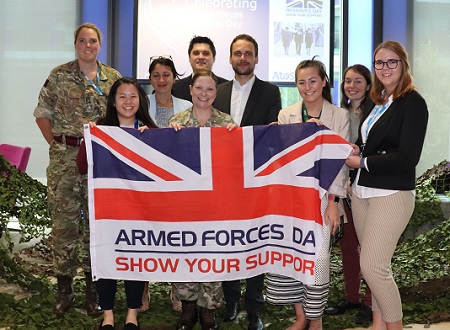 On Wednesday 26 June the Atos Armed Forces Network played its role in celebrating Armed Forces Week, including recognising our own Reserves in the organisation. Reservists play an essential role, helping protect our nation’s security at home and overseas.

One of our Reservists (serving 24 years!) is Major Dawn Saunders, who is also Global Head of Unified Communications and Collaboration Sales Enablement in Atos. In 2018, Dawn was promoted to Major, becoming the first female Officer Commanding of 94 (Berkshire Yeomanry) Signal Squadron. Dawn’s work life balance is satisfied by the passion she has for her family life and the UK Armed Forces.

Dawn said: “Atos recognises the commitment required and grants me special leave, allowing me to attend annual military and adventure training.”Read Dawn’s blog on How the Army Reserves made me a better me.

Amongst our employees, we have a growing number of armed forces veterans and reservists. They are extra-ordinary people who have trained, served and are still serving with Her Majesty’s British Armed Forces – the British Army, Royal Navy, or the Royal Air Force. The Atos Armed Forces Network is a non-exclusive group which is open to all employees who wish to show support for our armed forces community, not just reservists or veterans.

We’re proud to say that we received the highest standard Gold award in 2016’s Ministry of Defence Employer Recognition Scheme (ERS), which includes awards for employer organisations that pledge, demonstrate or advocate support to defence and the armed forces community and align their values with the Armed Forces Covenant.

Our programme encompasses many project streams including armed forces advocacy, improved transition and ongoing support for reservists and ex-service personnel, recruitment of service leavers – both young and old – through our partnership with the Career Transition Partnership (CTP), job-finding, graduate and personal development and the UK Defence enterprise skills agenda. We also support spouses of active service personnel, offering flexibility to balance work and home life.

Atos is supportive of time off for reservist training and has a robust mobilisation policy to support those preparing to deploy.

Clay Van Doren, COO and Deputy CEO UK&I said: “The commitment our Reservists make to our Armed Forces often goes unrecognised and having a marked national annual UK Reserves Day allows Atos as an employer to recognise their valuable contribution.”