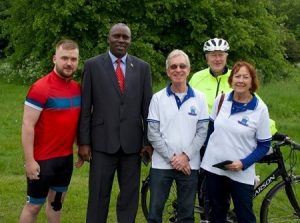 On Friday 17 May, Atos UK&I colleagues set off on their bikes from London Tooting Common to Paris as part of the Keframa School Build London2Paris Bike Ride.

The event was organised by Yan Kasianczuk – Atos Consulting, with the support of Tom Hall – Client Executive for Ministry of Defence, Pammy Gill – Service Manager and Matt Cresswell – Atos Syntel.

A team of 37 people – 29 of them cyclists – made their way from London to Paris, following months of crucial planning, fundraising and training. They were waved off by Uganda’s High Commissioner to the UK, Julius Peter Moto, who spoke about the ramifications for the children and community in northern Uganda, as well as their family and friends.

Despite many hills, a few falls and a torrential downpour on Sunday 19 May on the last 17-mile stretch to Paris, all participants completed the journey with beaming smiles on their faces. The cyclists travelled a staggering 200 miles on their bikes and consumed lots of energy drinks, bananas and energy gels across the weekend to keep them going on their journey. This was also a great opportunity for the team to network and build new friendships. 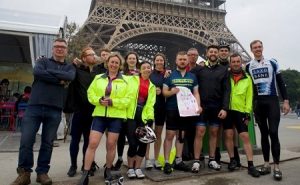 An incredible amount was raised, with all the money going towards the Keframa School Build – a charity that’s building a school for 500 children in northern Uganda.

“Every child deserves a quality education, so they have a chance to build a future full of hope and opportunities. It was for this reason I was so keen to take part and support the amazing work carried out by Keframa Charity each day.” Priya, Project Manager

“Cycling from London to Paris was one of my greatest achievements and it was a great opportunity to get to know my colleagues from different parts of the business. The experience was a great way to stretch my will power especially when cycling up large hills and through the thunderstorms, but it was all made easier by my fellow cyclists. I am very proud of the team who organised such an amazing event which will contribute to building school facilities in Uganda.” Faizal, SAP Supply Chain Consultant

Find out more about the Keframa School Build and the Together Network.