Volunteers make their mark at the National Memorial Arboretum 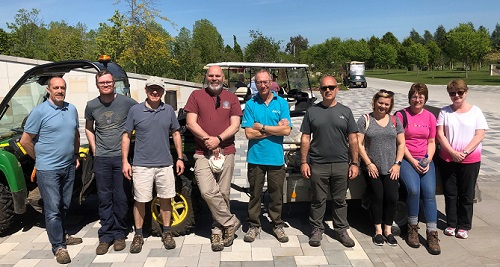 As part of our 2019 community outreach activities under the Armed Forces Covenant, for which Atos holds a Gold Award, nine of our Atos Armed Forces Network (AFN) colleagues took a day out to volunteer at the National Memorial Arboretum (NMA) – the UK’s Centre of Remembrance in Staffordshire on Tuesday 14 May.

This is the third year running that the network has visited this symbolic and inspiring arboretum, containing over 300 memorials to military associations, charities, emergency services, fraternity groups and individuals set in 150 acres of maturing woodland, containing over 30,000 trees. The team supported the Ground Works team in the upkeep of the grounds and memorials, and were treated to a guided tour of the Special Forces memorial grove by a former member of the SAS.

Di Nicholls, UK&I HR Business Partner said: “This was my first AFN NMA volunteering visit and it was a great experience, poignant and reflective whilst having fun with colleagues. I had the responsibility of cleaning dedication plaques. Reading the stories, seeing names and ages of the men and women of our Armed Forces who laid down their lives, especially when they were as young and 15 and 16 years old was really moving. A great day with a mix of emotions that I wouldn’t hesitate to do again.”

As the Armed Forces Network has grown and started to establish its work and name internally as well as externally with clients, a new AFN visual identity is now live. This new logo symbolizes the support of Atos to Her Majesty’s British Armed Forces – the Royal Navy, British Army, and the Royal Air Force.

Find out more about the Atos Armed Forces Network.