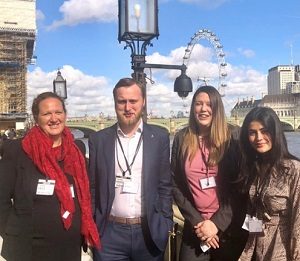 During National Apprenticeship Week, Atos learning services provider, QA, hosted a networking event at the House of Commons. Atos UK&I, alongside other companies, were invited to celebrate the progress made in raising the profile and quality of apprenticeships. The event centred around giving apprentices and organisations directly involved in apprenticeships an incredible setting to celebrate the transformational power of blending learning with on-the-job experience.

Priya and Rhys, both junior Project Managers, represented Atos UK&I apprentices at the event, which included a line-up of leading voices such as former Shadow Education Minister Sharon Hodgson as well as several speakers from QA and various organisations, including an inspirational story of an exapprentice who is now running his own company.

Rhys said: “We were honoured to represent Atos Apprentices in Parliament, and it was a fantastic opportunity for us to hear from the Government and key industry players. It was a thought provoking and insightful event with plenty of opportunities to engage with the wider apprentice community.” 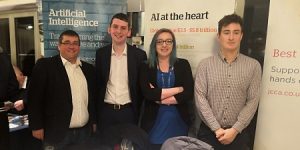 On 6 March, our colleagues from our Moray (Forres) site in Scotland attended the Moray Apprentice Showcase event, organised by Scottish Government funded project – Developing the Young Workforce (DYW). The event aimed to increase the awareness of the Apprenticeship Family by showcasing local career success stories developed through various apprenticeship programmes. Atos also exhibited at the event.

Representing Atos at the event, James Bell, Project Manager spoke to delegates about his successful journey as an Atos apprentice. James said: “The event was a fantastic opportunity to interact with future possible apprentices and to highlight the employment opportunities that Atos has to offer to young people.”