A £15m programme establishing an internationally-recognised supercomputing and Big Data facility for Wales is being launched at the Senedd in Cardiff on Thursday 11 October 2018. 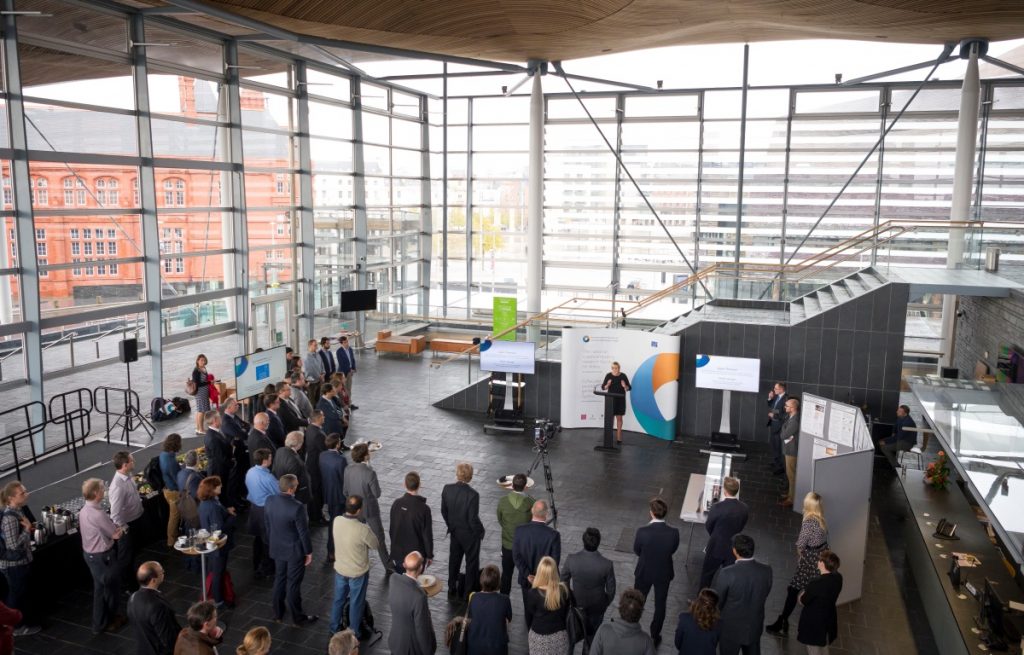 Supercomputing Wales, led by Cardiff University in partnership with Aberystwyth University, Bangor University and Swansea University, will offer high-performance data analytics to the research community and industrial partners across the country.

The facilities provide a step change in supercomputing-enabled scientific research in Wales and will pave the way for world-class, cutting-edge research, bringing in millions of pounds of research funding and making a significant contribution to the Welsh economy.

Supercomputing Wales has been funded by £9m through the European Regional Development Fund (ERDF) through the Welsh Government, matched by a multi-million-pound investment from the university partners.

New supercomputing hubs based in Cardiff and Swansea will offer research teams across the consortium universities access to state-of-the-art facilities and enable new links with industry.

Research Software Engineers will work with researchers to develop algorithms and customised software that harnesses the power of the supercomputing facilities, to perform multiple computational tasks simultaneously at very high speeds.

Under a new agreement with Supercomputing Wales, Atos in partnership with Dell EMC through a joint Atos Dell EMC Supercomputing Centre of Excellence, are delivering a full suite of the latest in high performance computing equipment, software and services.

The programme will support a number of ground-breaking research projects being conducted at the consortium universities.

At Cardiff University, the Gravitational Physics Group who last year announced the first ever detection of gravitational waves as part of the LIGO (Laser Interferometer Gravitational-Wave Observatory), will benefit from the facilities. In coming years, gravitational waves will allow researchers to examine the cores of exploding stars and probe the structure of neuron stars, potentially revealing completely new and unexpected phenomena that will challenge our current understanding of the universe.

The Cardiff University-led Wales Gene Park will also take advantage of the facilities, helping to advance its cutting-edge research that provides understanding, diagnosis and treatment of a wide-range of inherited diseases and cancer.

At Swansea University, the facilities will support ‘The Bloodhound Project’ – the Land Speed Record project attempting to create the world’s first 1,000 mph car – with the facilities used to simulate the car’s behaviour at unprecedented high speeds.

Swansea University will also use the facilities to generate the global information needed for weather forecasting and improve models of the climate, with algorithms developed by the University used by the UK Met Office as part of its daily forecast.

At Aberystwyth University, the facilities will be used to support research projects including DNA sequencing for plant breeding, and the Big Data challenges of earth observations, with the facilities used to analyse high-resolution satellite imagery to assess land cover and vegetation.

At Bangor University, the facilities will support tidal energy and oceanographic projects, with opportunities for interaction with the ERDF funded SEACAMS 2 project. 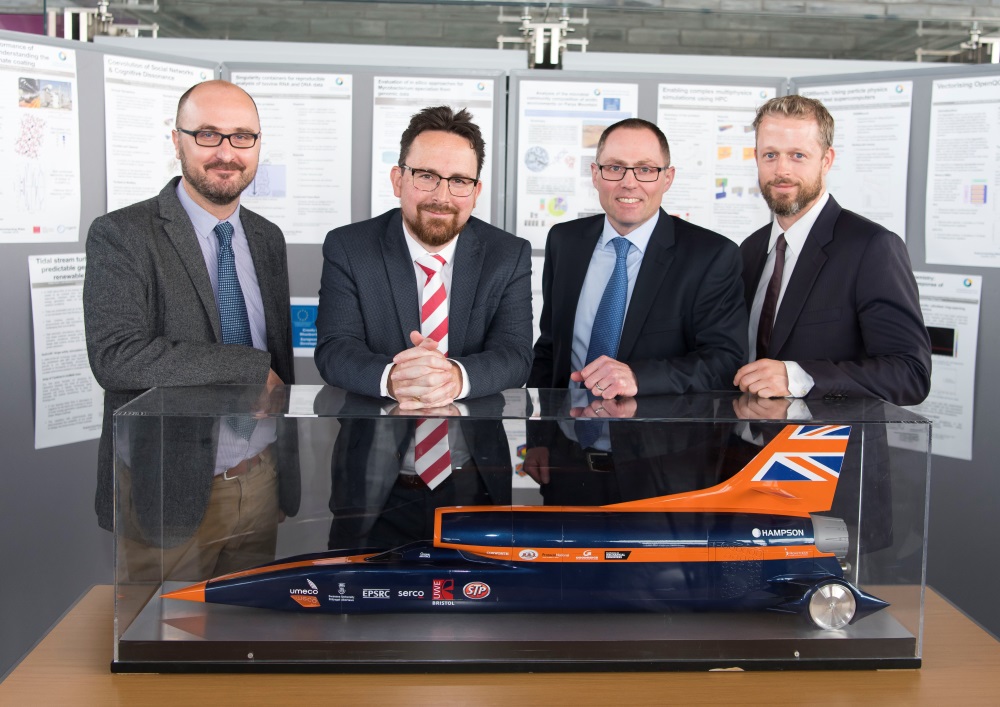 Formally launching the programme at the Senedd, Professor Roger Whitaker of Cardiff University and Academic Director for Supercomputing Wales said: “Supercomputing Wales will unlock the world-class research capabilities we have here in Wales, placing the country on a firm competitive footing worldwide. The programme will support large-scale research proposals that demonstrate the degree of ambition called for in the Welsh Government’s science policy, Science for Wales. Supercomputing has also been recognised as an important component of the UK’s new industrial strategy.”

Professor Biagio Lucini from Swansea University said: “This is a significant investment that represents a major step forward for Wales, contributing towards its competitiveness in science, engineering and innovation.”

Gavin Thomson Senior Vice President, Big Data & Security UK&I, Wales, Scotland, Ireland, Atos said: “We are delighted to be wokring with Supercomputing Wales to create the world’s first Supercomputing Centre of Excellence. Together, working with our technology partner Dell EMC we are helping to build on Wales’ ambitions of becoming a dynamic and world-class digital economy. The country is well on its way to achieving this aspiration, and this will only accelerate Wales’s position as a leader in supercomputing research.”

Under a new agreement with Supercomputing Wales, Atos in partnership with Dell EMC, through a world-first joint Atos Dell EMC Supercomputing Centre of Excellence, are delivering the supercomputers, BullSequana S Datalake appliances and on-demand cloud-based supercomputing simulation and services.

Supercomputing Wales is a strategic programme of investment in the university sector in Wales intended to change the way supercomputer facilities are used to support research activities. The programme is led by Cardiff University, in a consortium with Aberystwyth, Bangor and Swansea universities. The programme is part-funded by the European Regional Development Fund (ERDF) through the Welsh Government.

Supercomputing Wales will deliver high performance computing and high-performance data analytics to Wales’ research community and industry, across strategically important sectors for the Welsh economy including; nano-scale materials and advanced engineering; energy and the environment, life sciences and health and the digital economy.

Atos is a global leader in digital transformation with 120,000 employees in 73 countries and annual revenue of € 13 billion. European number one in Cloud, Cybersecurity and High-Performance Computing, the Group provides end-to-end Orchestrated Hybrid Cloud, Big Data, Business Applications and Digital Workplace solutions through its Digital Transformation Factory, as well as transactional services through Worldline, the European leader in the payment industry. With its cutting-edge technologies and industry knowledge, Atos supports the digital transformation of its clients across all business sectors. The Group is the Worldwide Information Technology Partner for the Olympic & Paralympic Games and operates under the brands Atos, Atos Syntel, Unify and Worldline. Atos is listed on the CAC40 Paris stock index. 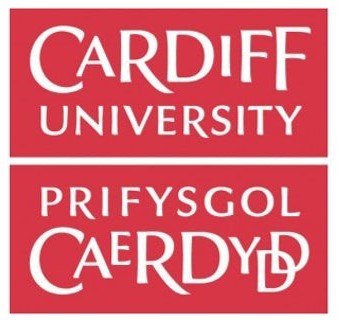 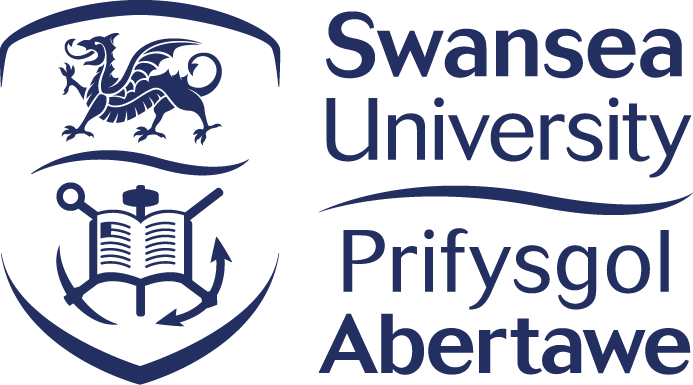 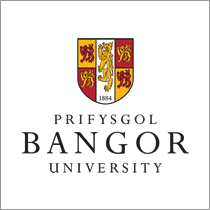 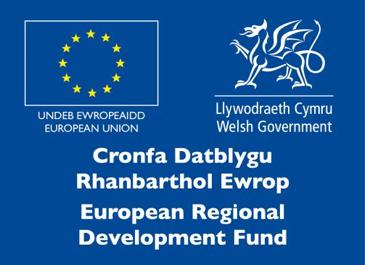