Atos, a global leader in digital transformation, celebrates today’s unveiling of the Gallagher Premiership Rugby fixture list that it developed.

With a global audience spanning more than 200 countries, fans eagerly anticipating the release of the schedule might not be aware that for nearly a decade the fixture list has been compiled by Atos. Using a combination of programming technology and human insight, a date and location is set for each of the 132 matches over the course of the regular season.

Atos has acquired deep experience in match scheduling stemming from long-term partnerships including with the Premier League and English Football League to develop their fixture lists.

“Atos has been a key component in producing a compelling Premiership and aiding its growth in both attendances and broadcast audiences, and we can now look forward to what promises to be an exciting Gallagher Premiership Rugby campaign,” added Oliver.

Commenting on the company’s role, Adrian Gregory, CEO, Atos UK & Ireland said: “It is a privilege to perform this role and we acknowledge the responsibility that comes with compiling the fixture list, especially on this day as expectant fans focus on stand-out fixtures in anticipation of a spectacular new season of elite English rugby in a league often described as the best in the world.”

Striving to balance the requirements of clubs, surrounding communities as well as twelve sets of passionate fans is Glenn Thompson, Technical Architect is the Atos data guru in charge of overseeing the development of the fixture list.

The fixtures list announced today can be found at www.premiershiprugby.com. 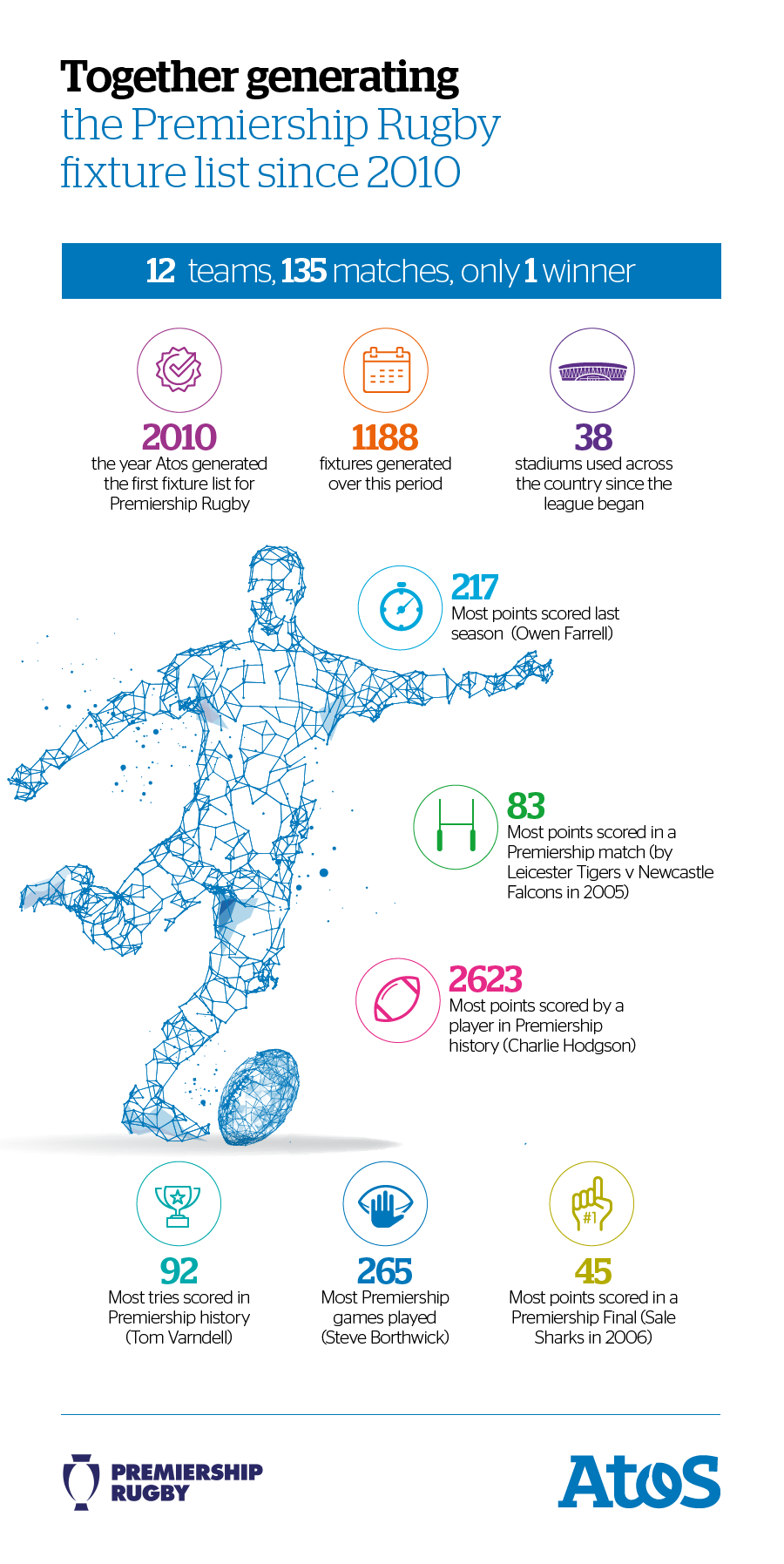 Atos is a global leader in digital transformation with approximately 100,000 employees in 73 countries and annual revenue of around € 12 billion. European number one in Big Data, Cybersecurity, High Performance Computing and Digital Workplace, the Group provides Cloud services, Infrastructure & Data Management, Business & Platform solutions, as well as transactional services through Worldline, the European leader in the payment industry. In the UK & Ireland around 10,000 employees deliver business technology solutions for some of the country’s largest public and private sector organisations. With its cutting-edge technologies, digital expertise and industry knowledge, Atos supports the digital transformation of its clients across various business sectors: Defense, Financial Services, Health, Manufacturing, Media, Energy & Utilities, Public sector, Retail, Telecommunications and Transportation. The Group is the Worldwide Information Technology Partner for the Olympic & Paralympic Games and operates under the brands Atos, Atos Consulting, Atos Worldgrid, Bull, Canopy, Unify and Worldline. Atos SE (Societas Europaea) is listed on the CAC40 Paris stock index.

Should you no longer wish to receive news from Atos UK&I, please contact AtosUK@3×1.com