The Government must embrace the best of private sector innovation if it is to deliver the high-quality digital services that citizens expect, a new report from the Institute of Directors, supported by Atos, finds today [Tuesday 2 January]. 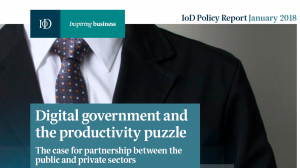 The Government has said in its Industrial Strategy that it is keen to use procurement as a means to raise the UK’s productivity, and the report argues digital services is one area ripe for improvement in 2018 through deeper partnership with the private sector.

Six in ten company directors surveyed by the IoD* thought digital services run by the public sector were inferior to those created by the private sector, such as online banking. In order to make improvements, a majority of IoD members thought the Government should focus on the services it wants to deliver rather than developing products itself, and improve the way it works with technology companies, large and small.

Over half of business leaders did, however, report that they had noticed a positive impact since the launch of the Government Digital Service (GDS) in 2011. GDS was responsible for the creation of gov.uk, a single point of access for Government information and services, which IoD members said had shown some success in providing services that were easier to use.

Overall however, more than three quarters of company directors expressed scepticism about the public sector’s ability to take advantage of technological advances including automation, while six in ten also think better use of data by the public sector could reduce the time they spend complying with regulations, and half (49%) say it could make them more productive.

The report calls for the Government to open itself up to digital transformation, viewing the private sector as an essential partner, and creating an environment that allows for innovation.

Stephen Martin, Director General of the Institute of Directors:

“While there has been some improvement in recent years, business leaders still feel the public sector is lagging well behind when compared against the innovation we’ve seen from companies. Our members are both providers and users of government digital services. They are very keen that the Government make better use of the knowledge and experience that exists in businesses of all sizes.

“The gains could be not only better and more cost-efficient services, but also reduced time wasted on form-filling for companies. Raising the UK’s productivity is the driving force behind the Government’s economic policy, so they should be looking for opportunities to work with the private sector to improve their digital offering. This could make life easier for small firms in particular, freeing up time for our members to spend improving their businesses.”

“Government does not need to lead the way but should demonstrate that it can both identify and deliver the innovation that digital transformation can provide and which can lead to increased productivity. It can be said to have tried by establishing Government Digital Services, however, momentum appears to have slowed.

“By being open to a new partnership paradigm, government – and more importantly, government procurement – has the opportunity to harness greater innovation for the benefit of the citizen, and deliver improved productivity and value for the taxpayer.”

The full Digital government and the productivity puzzle report can be found here.

The Institute of Directors is a non-party political organisation, founded in 1903, with approximately 30,000 members. Membership includes directors from right across the business spectrum – from media to manufacturing, professional services to the public and voluntary sectors. Members include CEOs of large corporations as well as entrepreneurial directors of start-up companies. The IoD was granted a Royal Charter in 1906, instructing it to “represent the interests of members and of the business community to government and in the public arena, and to encourage and foster a climate favourable to entrepreneurial activity and wealth creation.” The Charter also tasks the Institute with promoting “for the public benefit high levels of skill, knowledge, professional competence and integrity on the part of directors”, which the IoD seeks to achieve through its training courses and publications on corporate governance.

Atos is a global leader in digital transformation with approximately 100,000 employees in 72 countries and annual revenue of around € 12 billion. In the UK & Ireland around 10,000 employees deliver business technology solutions for some of the country’s largest public and private sector organisations. The European number one in Big Data, Cybersecurity, High Performance Computing and Digital Workplace, The Group provides Cloud services, Infrastructure & Data Management, Business & Platform solutions, as well as transactional services through Worldline, the European leader in the payment industry. With its cutting-edge technologies, digital expertise and industry knowledge, Atos supports the digital transformation of its clients across various business sectors: Defense, Financial Services, Health, Manufacturing, Media, Energy & Utilities, Public sector, Retail, Telecommunications and Transportation. The Group is the Worldwide Information Technology Partner for the Olympic & Paralympic Games and operates under the brands Atos, Atos Consulting, Atos Worldgrid, Bull, Canopy, Unify and Worldline. Atos SE (Societas Europaea) is listed on the CAC40 Paris stock index.