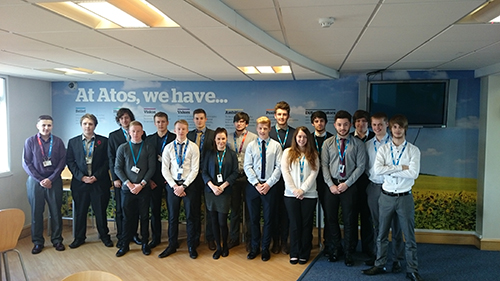 Atos has boosted its team in its UK Crewe office with the introduction of a new User Application Management Academy apprenticeship scheme for twenty new apprentices.

Atos, an international leader in digital services, has boosted its team in the north-west with the introduction of a new apprenticeship scheme at its office in Crewe.

The User Application Management (UAM) Academy, designed to turn A-level students in to budding young IT professionals, has already taken on board twenty apprentices since the scheme started in 2013.

The new programme provides students with the training and qualifications necessary to move into a full time role within the User Application Management Team after 13 months.

David Hislop, UAM Academy lead, has been instrumental in turning the project into a glowing success.

David said: “It’s encouraging to be able to provide this opportunity for young and talented apprentices. The past year has been a remarkable journey and we could never have predicted the quality and ability that we have seen from our new recruits.”

The Atos Apprenticeship Scheme was first introduced in 2012 in response to what was seen as a large ICT talent gap amongst young people throughout the UK. The programme allows those involved to build a career in IT through formal training and development programmes and a number of recognised qualifications through QA Apprenticeships.

Mr Storrs said: “The User Application Management Academy provides young people in Crewe and the surrounding areas with an interest in IT development, the opportunity to build their career in an area where Atos is committed to growing the business for many years to come.

“Taking on apprentices and building up the UAM Academy has been a success for the business as it has allowed us to replace sub-contractors with our own team and that has helped increase productivity by 8% in the past six months, which is a testament to the hard work and dedication of our young apprentices.

“It is extremely rewarding walking into the office and seeing the new faces that will represent Atos in the future. We are proud to be able to offer this fantastic opportunity to these young and talented apprentices.”

The Atos Apprenticeship programme has been widely recognised for its quality. The company was declared one of the City & Guilds Top 100 Apprenticeship Employers in 2013, was regional Winner of the Employer of the Year in 2013’s National Apprenticeship Awards, and was also the winner of Scotland’s Best Newcomer Employer for Apprenticeships in 2012.

Atos is focused on business technology that powers progress and helps organizations to create their firm of the future. The Group is the Worldwide Information Technology Partner for the Olympic & Paralympic Games and is listed on the Euronext Paris market. Atos operates under the brands Atos, Atos Consulting, Atos Worldgrid, Bull, Canopy, and Worldline. For more information, visit: uhttps://atos.net/en-gb