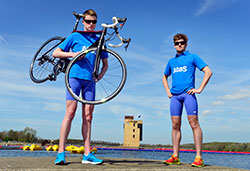 Two of Scotland’s leading triathletes have had a sneak preview of the venue where they aim to compete with distinction for Scotland on the opening day of competition at the Glasgow 2014 Commonwealth Games in July.

David McNamee, currently ranked 16th in the world, and Marc Austin, World Junior silver medallist, were at Strathclyde Country Park as part of their new Ambassadorial roles with Glasgow 2014 Commonwealth Games supporters’ international IT services company Atos, to see for the first time the way in which the venue is shaping up for the Games.

David (26) and Marc (20) will work with the Atos team in the run up to and after Glasgow 2014 to amplify the company’s partnership with Glasgow 2014 and highlight the importance and relevance of information technology in athletic and business performance.

The role will also see them visit schools in Glasgow, Edinburgh and Nairn in the coming months to talk to pupils and staff about the benefits of a healthy lifestyle amid growing interest in triathlon across the country.

Both David and Marc were delighted to have had the opportunity to reacquaint themselves with the facilities at Strathclyde Country Park and test their bikes on the track around the site.

David, who has already been selected to represent Team Scotland at Glasgow 2014, felt the trip to the venue had thrown up some vital information which would be important to him during the event.

“Obviously I have been here before, but this is the first time I have seen the new pontoon and this is definitely going to be a showcase event at a major Games so it is pretty crucial to have a look. Even though we race 1500 metres, 40km and 10km week in, week out, every event throws up something different, so if you can have a look and rehearse beforehand it helps gain that extra one or two percent you need at this level,” he said.

“The home crowd will also be very important to me and the other Scottish athletes. They give you that little bit more energy and can create an electric atmosphere. I’m mainly based in Leeds at the moment, but having been up here for a few days, I have been overwhelmed by the appreciation and vibes towards the Games and being here today and seeing the way Strathclyde Country Park is shaping up you can just feel the energy about the place.”

Marc is still waiting to hear if he will make the Scottish team, with the announcement due to be made on 12 June, but he too was delighted to have been in a position to have a close look at the venue for the event.

“This is the first time I have been here for a couple of years, but it does remind you of how close to home we will be competing at a major Games. I’m from Glasgow so having the Games here just means so much for me and that is really driving me on to deliver the performances I need to get there.

“It is pretty surreal that the Games are in Glasgow, but knowing that there will be people in the crowd cheering you on who have watched you grow up and establish your career is a major thing for me.”

Atos is delivering vital management and information technology systems for the Games and the company’s experience of more than two decades of support to Olympic and Paralympic Games around the world is helping power new levels of performance for the Commonwealth Games in Glasgow.

Atos Senior Vice President – Scotland, Gavin Thomson, said the company was placing significant emphasis on helping to support Glasgow 2014 as it aims to deliver the best and most successful Commonwealth Games ever.

Mr Thomson explained: “Our business technologists are already powering performance at the heart of the Games, working closely with the Organising Committee to deliver the best possible results for Glasgow 2014. Atos is one of the few proven delivery experts in this field thanks to our substantial expertise as Worldwide IT Partner for the Olympic and Paralympic Games,” he added.

“We have already delivered great results with the online volunteer portal which managed the applications for the Glasgow 2014 volunteer roles earlier this year and processed the 50,811 applications from people who used the portal to register their interest in participating in the Games. Our accreditation management system is now operational and will accredit up to 70,000 Games participants including athletes, officials, workforce, volunteers, media and sponsors.

“We are proud of the work our team delivers for Glasgow 2014, and are passionate about delivering our world-class solution from Scotland on the world stage,” added Mr Thomson.

Atos is focused on business technology that powers progress and helps organizations to create their firm of the future. It is the Worldwide Information Technology Partner for the Olympic & Paralympic Games and is quoted on the NYSE Euronext Paris market. Atos operates under the brands Atos, Atos Consulting & Technology Services, Worldline and Atos Worldgrid. For more information, visit: https://atos.net/en-gb