The Atos - Joseph Fourier Prize is an annual competition for scientists across the globe who apply, either individually or as a team, to their local Fourier competitions. It recognizes researchers, academics and industrial scientists working in advanced computing and artificial intelligence with a focus on decarbonization. In 2022, the top prize in advanced computing went to the FIRMAMENT team from ONERA (Office National d'Etudes et de Recherches Aérospatiales) in Palaiseau and Toulouse, France for its project on atomization of liquid jets.

Toulouse, we’ve got a problem!

One of the most challenging aspects of rocket engine design is managing combustion instabilities. These poorly understood phenomena are caused by the interaction between the combustion and the strong acoustics generated by the flame. During certain phases of rocket engine operation, such as engine ignition and low thrust operation, oxidizer (often oxygen) is injected into the combustion chamber in liquid state. To vaporize and mix the propellants as efficiently as possible, assisted atomization is used to create a spray of oxidizer droplets. The combustion instabilities that threaten engine integrity are highly dependent on this atomization process. Consequently, high precision modeling of atomization is a major challenge when designing rocket engines.

The French aerospace lab ONERA, in collaboration with the National Centre for Space Studies (CNES), is studying this phenomenon through unsteady numerical simulation using the ONERA multi-physics code - CEDRE. However, developing and validating advanced models is problematic, since the interface is difficult to characterize experimentally under severe conditions like those that exist in rocket engines.

A deeper journey into inner space

ONERA was granted more than 40 million computing hours on the Topaze computer at France’s Research and Technology Computing Center (CCRT) during the 2021 Grand Challenge operation for the FIRMAMENT project. In order to obtain precise information on the interface and gain a better understanding of the physical phenomena of atomization, the first high-fidelity direct numerical simulation (DNS) of an air/water jet atomization in the fiber regime was performed. With the new research code DYJEAT developed at ONERA, this two-phase flow was simulated with an incompressible level-set/volume-of-fluid interface capturing method.

Using more than 86,000 cores, it provided sufficient performance to converge the simulation on a mesh of nearly 3 billion points, which was necessary to capture liquid structures down to a size of less than 2% of the liquid jet's diameter. 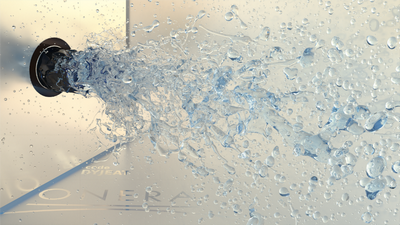 A photorealistic rendering of the simulation carried out by FIRMAMENT

Beyond the horizon: The future of FIRMAMENT

The results have already provided usable interface mapping for model validation. A new post-processing algorithm (AlgoDetect) developed in a recent PhD thesis (M. Averseng, 2022) was employed to detect, classify and follow each individual liquid structure. This level of detail allows for a deeper understanding of the liquid topology and the formulation of new, more accurate large-scale models. In the case of rocket engine conditions, the large-scale models being developed in the industrial code CEDRE can now be calibrated and validated before being applied to cryogenic flame simulations.

ONERA will use the results of this simulation in numerous other projects (e.g. PhD thesis of F. Granger 2022), including work to develop a simulation tool that can accurately reproduce combustion instabilities.

Apart from aerospace applications, this validation methodology can be used in many other fields. Despite the fact that the atomization of fuel injection in automotive or jet engines is very different, they can be optimized with a similar approach using DNS to design new, low-carbon engines. Furthermore, if the scope of this research is widened, it could be used in other areas, such as developing more efficient water dispersion systems for agricultural irrigation or firefighting.

Jean-Christophe HOARAU, PhD, post-doctoral fellow at ONERA
After graduating from MATMECA engineering school (Bordeaux) in 2016 and completing a PhD in computational fluid dynamics from ENSAM Paris in 2019, he did a post-doc at ONERA on the development of a high-fidelity two-phase simulation. Since 2022, he is employed in the multi-physics for energy department at ONERA Palaiseau as a research engineer.

Luc-Henry DOREY, PhD, research engineer
He graduated from ISAE-ENSMA engineering school (Poitiers) in 2008 and received his PhD degree in energetics from Ecole Centrale Paris in 2012. Since 2011, he is research engineer at ONERA, studying two-phase flow and combustion modelling for CFD simulation in liquid-propellant rocket engines.
https://www.researchgate.net/profile/Luc-Henry-Dorey

Davide ZUZIO, PhD
D. Zuzio graduated from Politecnico di Torino in 2007, and obtained his PhD degree in computational fluid dynamics from ISAE Toulouse in 2010. Since then, he is research engineer at ONERA, Department of Multi-Physics for Energetics, in Toulouse. His main research topic is the numerical simulation of two-phases flows applied to liquid assisted atomization.

Jean-Luc ESTIVALEZES, PhD, HDR
Jean-Luc Estivalèzes is graduated from ENSEEIHT Engineering Scool in 1984, obtained his Phd from Institut National Polytechnique de Toulouse in 1989 in Computational Fluid Dynamics and got HDR (Habilitation à Diriger les Recherches) in 2000. He has begin as Research Engineer at ONERA in 1988, He is now Senior Scientist at ONERA and part-time Professor at Institut de Mécanique de Toulouse. His main research topics are numerical method for two-phases flow simulation.
https://www.researchgate.net/profile/Jean-Luc-Estivalezes

More on the The Atos - Joseph Fourier Prize

About Xavier Vigouroux
View all posts by Xavier Vigouroux
Strategic Collaboration Coordinator, Global Big Data and Security, Atos
After a Ph.D. from Ecole normale supérieure de Lyon in distributed computing, Dr Xavier Vigoroux, worked for major companies at different positions: from support engineer in telecom infrastructure at Hewlett-Packard, tech lead at Sun microsystems, investigator at Sun labs, ... He joined Bull in 2006 and led the HPC benchmarking team for the first five years, then in charge of the "Education and Research" market for HPC, he launched and managed the "Center for Excellence in Parallel Programming" of Bull. This CEPP activities focus on tackling issues in HPC application performance. For two years, he had the position of program director for a research center in artificial intelligence, Naver labs Europe, and is now coordinating the strategic collaborations for HPC AI and Quantum in Bull/Atos.

H2OPE for a decarbonized future