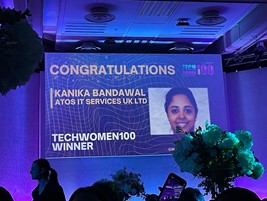 Following up after the announcement that Atos’ Kanika Bandanwal was the recipient of a 2022 TechWomen100 individual award, the award ceremony occurred two days ago at the QEii exhibition centre in London, with the aim to celebrate and spotlight winners both present and past, and to raise awareness for the growing number of women in the tech industry.

After being launched in 2017, TechWomen100 has been striving to recognize skilled and strong women in the technology industry, which not only raises awareness to the lack of females in said industry compared to men, but encourages those to enter the technology field, and provides support to them along their journey. The organization has recognized over 475 women since its inception. Kanika was the only nomination from Atos this year, highlighting her skill and aptitude in her craft.