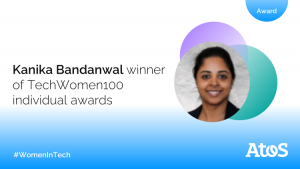 Kanika Bandanwal, Principal Consultant within Atos Digital Transformation area, has won this year’s TechWomen100 – a prestigious award which recognises and celebrates female diversity and inclusion throughout the technology industry. Kanika was the only individual nomination from Atos this year, highlighting her exceptional work throughout the year.

TechWomen100 has been continuously recognising and awarding women in the tech industry, having now celebrated over 475 women from various backgrounds and areas of expertise. First launched in 2017, the awards have grown significantly, attracting high profile partners such as Sky, Huawei, Goldman Sachs and Morgan Stanley.

Previous winners found that being awarded was an honour, and allowed them to trust in their capabilities, and empowered them to continue to make contributions to the Women in Tech community.