COP26 final decision – the Glasgow Climate Pact – reaffirmed the Paris Agreement goal of holding the increase in the global average temperature to 1.5°C or below. This goal requires cutting greenhouse gas (GHG) emissions in half by 2030 and reaching net-zero emissions by 2050. Net-zero means that the amount of GHG emitted into the atmosphere by human activity equals the amount of GHG absorbed by carbon sinks.

Yet, under current policies and COP26 commitments, we are likely to exceed the global carbon budget required to meet the 1.5°C goal in the early 2030s. In light of this fact, urgent action to reduce GHG emissions in the next decade is crucial. The Glasgow Climate Pact calls upon every country to reinforce its national goals by COP27 in 2022. 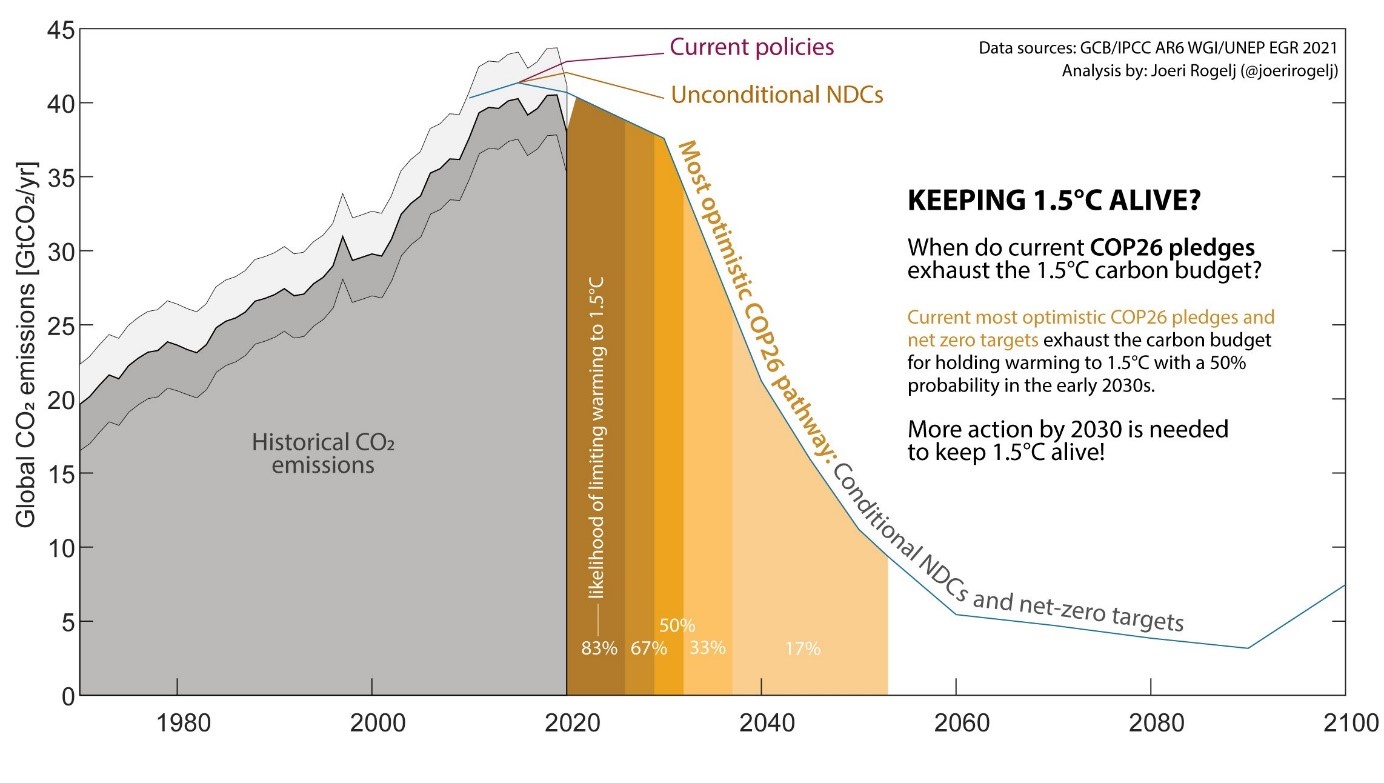 However, progress was made at COP26, and positive signals emerged regarding our collective ability to keep the 1.5°C goal alive.

China, Australia, Saudi Arabia, Nigeria and India each announced their net-zero goals — with target dates ranging from 2050 to 2070. In total, three-quarters of global emissions are covered by a net-zero target, and 12 countries have enshrined these objectives into law. However, questions remain over the level of ambition and the efficacy of some of these targets.

The United States made a comeback in climate action with a global pledge to cut methane emissions by 30% by 2030 compared to 2020 levels, launched along with the European Union and joined by more than 100 countries. Due to the short-lived nature of methane and its important global warming potential in comparison to other greenhouse gases, delivering on that pledge could help limit global warming by 0.2°C by 2050 and improve air quality.

The UK-led Coal to Clean Power Statement, signed by 77 countries and organizations, calls for the phase-out of unabated (without carbon capture and storage) coal power generation in the 2030s for major economies and in the 2040s for the rest of the world. The UK, US, France, Germany and the EU also announced a "Just Energy Transition Partnership" to help South Africa reduce its dependency on coal power.

In the Leader’s Declaration on Forest and Land Use, 140 leaders also announced their commitment to halt and reverse deforestation by 2030.

After six years of negotiations, Article 6 of the Paris Agreement has finally been agreed upon, establishing the foundations for a voluntary international carbon crediting and trading mechanism. The final text of Article 6 now provides clear guidance and accounting rules for countries wishing to engage in the international transfer of carbon credits to help achieve their national GHG goals and targets.

This mechanism can significantly reinforce mitigation efforts by making it less costly to attain reduction targets and to increase ambition. The accounting rules help safeguard against double-counting, and 5% of the proceeds from the sale of carbon credits will finance climate adaptation in poorer countries, providing a valuable source of climate finance. 80% of countries have declared their willingness to use Article 6 mechanisms to reach their national goals.

Businesses have been increasingly involved in multinational pledges and demonstrated a growing demand from the corporate sector for more ambitious action. Collectively, the voice of business is a powerful factor in catalyzing climate action in the face of slow geopolitical processes.

For example, an open letter organized by the We Mean Business Coalition and signed by 775 companies (including Atos) urged the G20 to end international coal financing in 2021. Similarly, businesses played a key role in enhancing the US’s national target, with over 400 companies signing an open letter led by Ceres and We Mean Business Coalition, calling on the US administration to increase climate leadership.

Moreover, companies are driving improvements in best practice. At COP26, an International Sustainability Standards Board (ISSB) was launched to develop a global standard for corporate sustainability disclosures, based on the Taskforce for Climate-related Financial Disclosure (TCFD) framework. In the voluntary carbon market, private standards for carbon credit certification are also being developed to ensure high quality credits that are aligned with new Article 6 rules.

The next challenge for the digital sector: progress in emissions measurement

The ability to accurately measure GHG emissions is an essential pre-condition of assessing progress towards the Paris Agreement.

Whether it’s providing national emissions inventories to comply with Paris Agreement reporting requirements or calculating how many carbon credits must be issued on the carbon market for a project, access to reliable and accurate data is crucial. Indeed, mismeasurement puts the world at risk of overestimating the progress we have made.

As the diversity of mitigation actions increases and carbon removal solutions ramp-up to reach net-zero by 2050, it is essential to know precisely at a global scale how much carbon is being reduced, removed from the atmosphere, traded, or accounted for by countries.

The next challenge for the digital sector will then be to provide innovative emissions measurement systems and trustworthy data to assess progress towards the 1.5°C goal. Decarbonization and digitalization will enable the required transformational changes across organizations and business models to meet near and long-term emission reductions targets in the decades to follow.

About Anouk Faure
View all posts by Anouk Faure
Anouk Faure, Manager Expert R&I Carbon Markets
Anouk joined EcoAct, an Atos company, in 2021, bringing over her background in carbon economics research to the Climate Innovation and Knowledge Center (CLICK). Anouk’s role is to develop and promote EcoAct’s expertise in carbon markets and pricing by analyzing the development of voluntary and compliance markets considering new regulations and developing innovative offers for EcoAct’s clients. She holds a PhD in Carbon Economics and, before joining EcoAct, she worked on the EU-ETS reform at the French Ministry of Industry.

Is your business agile enough for today's world?
Developing managers to lead confidently through dual digital transformation
Sustainable. Achievable. Scalable. Crafting accessibility initiatives that are sustainable in every sense of the word
Purple Light Up 2022