A brief history of Earth Observation

Viewed from the sky, the Earth is lyrically beautiful, but it’s also a heck of a puzzle. Whether you climb to the very top of a bell tower, like Napoleon’s pioneering cadastral surveyors, or send a satellite into orbit, observing the ground always comes up against a cruel reality: the Earth is round.

From balloons to aircraft

Observing our planet has always necessitated a degree of technical progress: after all, human beings have to defy gravity if they want to get their feet off the ground. After the Montgolfier brothers first accomplished the feat – launching a hot air balloon into the sky towards the end of the 18th Century – the initial applications of this innovation were military. A balloon was first used by the French Army to observe enemy positions at the Battle of Fleurus in 1794, undoubtedly contributing to their victory. Armies across Europe continued to use observation balloons, sometimes known as ‘sausages’ because of their distinctive shape, until the end of the First World War, when they were largely replaced by reconnaissance planes.

But the race to go higher and higher is not just a challenge for the military. The so-called ‘sounding balloon’ was invented for meteorological use by Frenchman Gustave Hermite, at the end of the 19th Century. These weather balloons became even more useful thanks to the development of radio transmitters in the 1930s, which enabled data from on-board sensors to be sent to the ground in real-time. And as early as the 1940s, these sensors were fitted to aircraft so that daily ‘soundings’ could be taken, allowing weather forecasters to provide even more accurate predictions.

Aviation has also been used since its inception to support cartographic efforts. In France, the National Geographic Institute (the IGN), which was founded in 1940 to succeed the Army Geographic Service, relies on aerial photographs when creating its maps. The IGN’s authoritative maps are used by everyone, from hikers to local councils, and it now has four specially equipped planes that photograph a third of French territory every year to provide a precise picture of the whole country.

But despite everything, cartographers have only a fleeting grasp on reality. A map is out of date as soon as it’s made: a flood will have changed the profile of a riverbed, trees will have been cut down, a house will have been built… Aerial images are only really useful if they are very regularly updated, in strictly replicated conditions. So earth observation will be one of the key beneficiaries as scientists and political leaders across the planet realise their ambition of conquering an even higher frontier: space.

Here too, the military has always driven the technological advances essential to achieving that victory. In June 1944, the German V2 missile was the first man-made object to reach an altitude of over 100km: the accepted dividing line between the Earth’s atmosphere and space. At the end of World War II, German scientists were recruited to contribute to Soviet and American research, in the ‘space race’ that was so emblematic of the Cold War.

In October 1957, the USSR was the first nation to put a satellite (Sputnik) into orbit around the Earth, followed in April 1961 by a man, Yuri Gagarin. The United States responded by putting the first man on the Moon, when Neil Armstrong took his famous ‘giant leap’ in July 1969. These missions, fuelled by East/West rivalry, energised scientific research and boosted technological skills, paving the way for much more inspiring achievements than simply boosting national pride.

Sentinels at the edge of the atmosphere

Nowadays, the satellites whizzing around over our heads have three major roles: telecommunications, geo-location/navigation and Earth observation. The eternally spherical nature of our blue planet means that cartography is always a highly technical discipline: images constantly have to be flattened and assembled into a coherent mosaic. Of course, the higher you climb above ground level, the less pronounced the curvature: so that balloons, planes and, most recently, satellites have given cartographers access to a less and less distorted vision of the terrain. But that gives rise to other problems. The photographic optics have to be sensitive enough to capture sufficiently precise details. It is necessary to model and compensate for atmospheric disturbances. Clouds (and their shadows) get in the way. On the ground, landmarks change or fade, blurring the intersections. And, of course, satellites are blinded by the darkness of night half the time.

From 1985, the SPOT Earth observation satellites launched by France have been providing high-resolution images, reserved mainly for research and military users, as well as for some larger companies. Why such a restricted audience? It’s a matter of cost. These satellites compensate for the fact that they don’t revisit places particularly frequently, with optics than can be precisely oriented. The images then need to be flattened, which, added to other processing activities, makes them very expensive ... and not very competitive, especially when compared to images from American satellites.

Two decades ago, Europe set up its own Earth observation program: Copernicus. The space element of the programme consists of a series of satellites, the Sentinels, which provide data free of charge. The Sentinel family of satellites – being rolled out between 2014 and 2029 – monitor continents, oceans and the atmosphere from every angle, using a wealth of instruments including optical, infrared, radar and chemical sensors. The Sentinels currently offer ground resolution down to 10m x 10m (set to increase to 2m x 2m within four or five years) and, most importantly, that all-important repeatability, because each point is revisited every five days. 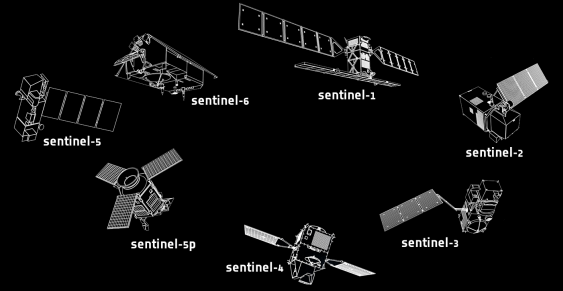 Free, rich, precise, repetitive: Copernicus' images are game-changing because they bring together all the characteristics needed to build useful commercial services for everyone from local authorities to farmers, utilities and insurance companies. By enriching this data and adding the appropriate infrastructure, tools and support, platforms such Mundi (supported by a consortium led by Atos) allows developers to access this huge reservoir of information and design a whole host of innovative services.

The potential for quantitative and qualitative analysis of vegitation cover, means that agriculture could be one of the biggest beneficiaries of these new opportunities when it comes to optimising irrigation and fertilisers, forecasting crop yields, planning and monitoring agricultural activities... 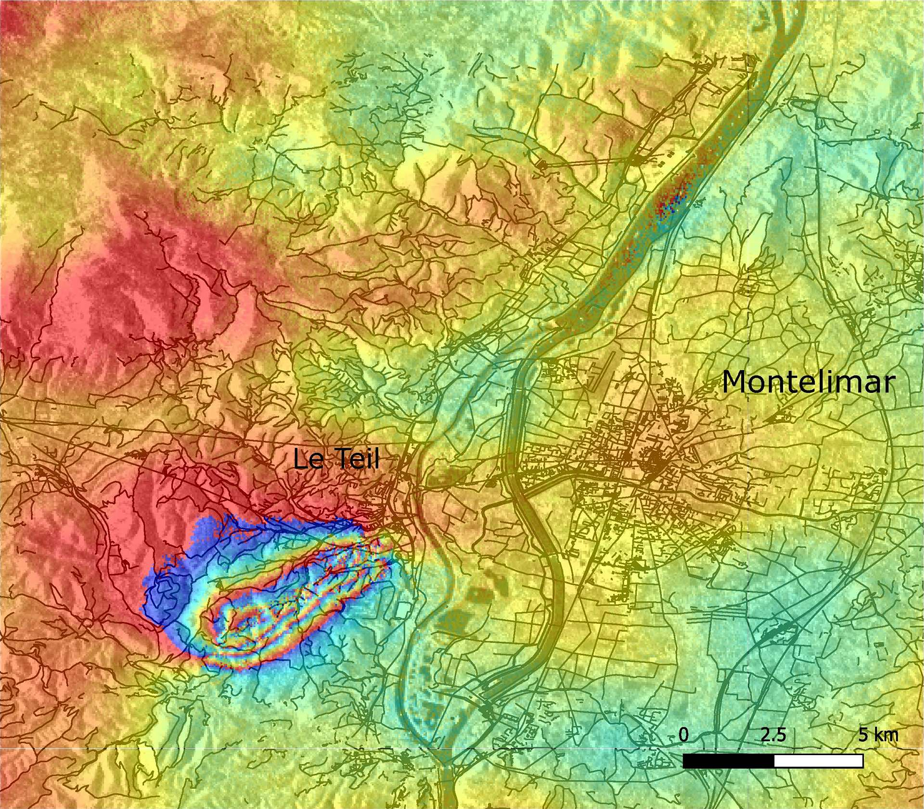 And as extreme weather events become more frequent, insurers are also gearing up to anticipate and assess the results of them on a large scale. Faced with these kinds of dramatic events, local and national government is also mobilising its forces, and satellite images can be extremely helpful both in preventing them and supporting interventions if they do take place. Recently, satellite images helped to map the fault responsible for an earthquake in November 2019, in Montélimar, France, that measured 5.4 on the Richter Scale. They can also help settlements with more than 20,000 inhabitants, for example, to implement their regional Climate-Air-Energy Plans, to optimise urban planning by combating ‘heat islands’ centred around large towns and to prevent excessive ‘land take’ which erodes soil upstream from flood planes.

More generally, satellite images are particularly interesting when they are combined with other data from the field. So, for example, the extremely sensitive instruments on board the Sentinels can detect tiny variations in altitude on very large structures such as pipelines, dikes or viaducts. Taken on their own, these indicators are not enough to ring the alarm bells, but they can be used to trigger targeted preventive inspections. Conversely, we can detect abnormal pollution levels or plant mortality on the ground, for instance, and use satellites to assess the full extent and spread of such phenomenon.

Agriculture could be one of the biggest beneficiaries of earth observation when it comes to optimising irrigation and fertilisers, forecasting crop yields, planning and monitoring agricultural activities

By moving away from the Earth to observe and understand it, we can explore scenarios that may help us make better decisions, by gathering together all the necessary expertise. In the right hands, Sentinel data can help monitor the balance between nature and human activities, and promote a more harmonious equilibrium. Nevertheless, there’s a risk that this data will be diverted to serve just the opposite purposes or to support dubious causes. That is why it’s so important that the ecosystems which form around the data – institutions, technological companies, start-ups... – design the future uses of that data to positively encourage and enable a more ethical and greener society!

About Laurent Clergue
View all posts by Laurent Clergue
Product Manager Space Imagery Services
Laurent Clergue has always been fascinated by space imagery, not with intent to conquer other worlds but rather to provide a deeper understanding of our own planet. He’s a senior consultant and product manager of space imagery Software as a Service (SaaS) for Atos. This role allows him to not only follow his passion but also to show others the best ways to incorporate these technologies into their businesses. Laurent came to Atos from GEOSIGWEB, a pioneering geomatic software startup, where he was CEO. He was responsible for defining the company’s SaaS strategy and developing business in the Public Sector. At the end of his 10-year tenure, more than 1,000 municipalities in France were using GEOSIGWEB solutions. Laurent enjoys offering IT solutions to problems that didn’t seem to call for spatial and computer technologies. His contributions have made it possible now to monitor precious natural resources in order to safeguard them. He is ever the humanist who met the engineer.

Making smart manufacturing in Biopharmaceutical a reality
How to get your C-suite on board with SAP Cloud migration
Be the CEO of your career and drive it further
Observability: DevOps meets green IT