In many countries, the 5G public network roll-out has only just begun. Telecom operators are gradually converting from non-standalone 5G core network functions to a standalone 5G core, making their network infrastructure independent of LTE legacy which will be switched off at some point in the future. Radio access network (RAN) modernization is happening steadily but slowly, and the same is true for 5G-based multi-access edge computing (MEC).

Given this reality, is it really time to talk about 6G, which is not expected until 2028 or later? Quite simply, yes! We can foresee the advancements that 6G will bring — and understanding them will help us make wise investment decisions in today’s 5G era.
In this two-part blog series, we will first examine the path forward and what it will take to get to 6G. In the second installment, we will explore the changes we expect 6G to bring in terms of technology, efficiency and sustainability.

A look at the 6G roadmap

Most analysts expect 6G to be fully launched around 2028. In a 2020 article entitled 6G and Beyond, Georgia Tech researchers Akyildiz, Kak and Nie predicted that around 2023 the 6G visioning phase will end and the 6G requirements definitions phase will begin. Key hardware and software technology demos by the industry will begin in 2022, and the first 6G test beds are likely to arrive in 2026.
Another way to track this progress is by looking at the evolution of 3GPP mobile broadband standards. Release 18 (Rel-18) is currently underway, dubbed 5G-Advanced. 6G will be fully reflected from Rel-21 forward, according to today's forecasts. However, an interim generation called 5.5G is expected as early as 2023 with Rel-19.

Interim generations are not surprising: In the heyday of LTE around 2016, a similar go-between surfaced based on 3GPP Release 13, anticipating many of today’s 5G features. It was called 4.5G (aka LTE Advanced Pro).

With 5G-Advanced already being worked on and 5.5G coming closer, those in charge of investment strategies must be prepared. Let’s look at the most important new things the 6G evolution promises to introduce.

New use cases: Everybody get your BAN

Wireless wearables like smart watches and smart jewelry are not new — they go back to LTE (4G) times. The 5G era is likely to produce a new range of miniature wearables, equipped with an eSIM and directly connected to 5G networks.

But technology does not stop at wearables. Welcome the BAN or Body Area Network!
Wikipedia defines BANs as “a wireless network of wearable computing devices. BAN devices may be embedded inside the body as implants, may be surface-mounted on the body in a fixed position, or may be accompanied devices which humans can carry in different positions, such as in clothes pockets, by hand, or in various bags.”

As technology progresses, these body sensor units (or BSUs) may become smaller and smaller, eventually reaching the single-digit micrometer or even nanometer scale.
6G will probably be the first mobile networking technology with provisions for nanoscale networking, though that is likely to be a future extension. In their paper, Akyildiz, Kak and Nie depict the Internet of [Bio]NanoThings and quantum communications by an assumed "B6G" portion of 6G, as shown in Figure 1. 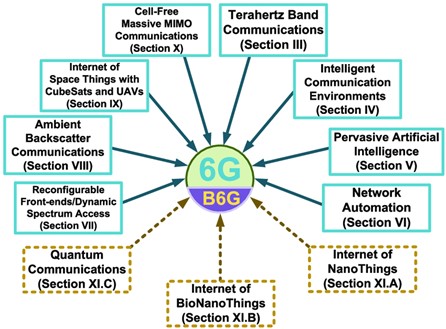 Other potential use cases

As the potential future capabilities of 6G come into sharper focus, many researchers and industry watchers are identifying compelling new 6G use cases, which include:

Watch this space for the 2nd part of this story where we'll turn our attention to the technology, efficiency and sustainability changes we can expect once 6G becomes a reality.

By Franz Kasparec, Head of global digital infrastructure and cybersecurity offerings management in the telecommunications and media industries

Internet of Things and Edge
Telecommunication

Unlocking the code of life: mRNA, cybersecurity, and additive manufacturing
Are we letting a California car company conquer the European automotive market?
The three pillars of mainframe transformation: Manage, migrate and modernize
Data monetization for sports: a true game-changer