5G Slicing: Unlocking the value of the new network

Network slicing is an often-discussed feature of 5G technology. Application subsystems can be assigned a dedicated slice of the mobile network, with guaranteed bandwidth, low latency and availability, tailored to the specific needs of an application use case.

No two applications are created equal, and 5G applications are no different. However, there are common elements and recurring themes, such as numerous use cases for video transmission over 5G mobile networks. Here are just a few examples:

eMBB network slices address all these situations. They may not have the extreme reliability and low latency of URLLC (see below), but still provide dependable bandwidth that legacy LTE (4G) and traditional Wi-Fi cannot. When an LTE network or WLAN is overloaded, the application fails.

In 1999, Andy Stanford-Clark and Arlen Nipper were having difficulty implementing supervisory control and data acquisition (SCADA) for oil pipelines. Communications were sent over extremely expensive satellite links, so efficiency was key. They invented a very effective lightweight communication protocol later known as message queuing telemetry transport (MQTT) that has developed into a standard IoT protocol for industrial and consumer use.

Today, telemetry and industrial control are at the core of numerous industrial Internet of Things (IIoT) and operational technology (OT) use cases in many industries.

The mMTC network slice services the exploding IoT market over 5G. There is no high demand on bandwidth, since MQTT and other IoT protocols are very bandwidth efficient. Latency is not an issue either, since short delays in sensor data point message arrival don’t matter. However, the number of distributed IoT sensors and actors is enormous, and demands for cost and energy efficiency are high.

Atos has encountered use cases that combine distributed video surveillance or industrial visual inspection with telemetry. In such situations, it’s tempting to carry the trickle of sensor data over the same network as the video streams — since it has little impact on bandwidth. However, when the number of sensors significantly exceeds the number of cameras or the geographical distribution is different, it’s preferable to utilize an mMTC service for telemetry in parallel with an eMBB service for the video. Of course, these decisions will vary case-by-case, and Atos’s edge solution experts are ready to advise clients of the best solution.

URLLC is possibly the most prestigious of the 5G network slice types. Some use cases include:

The European Telecommunications Standards Institute (ETSI) has compared the key capabilities of these network slice types. The illustration below shows that eMBB is the most likely successor of legacy LTE, while mMTC and URLLC are well-suited for niche solutions with maximum connection density or minimum latency, respectively. 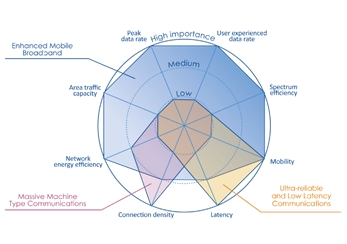 Taken together, the choice of eMBB, mMTC and URLLC services gives 5G a clear advantage over 4G legacy networks.

All the application examples discussed above have one thing in common: The era of the network acting as a "dumb pipe" is over. 5G not only introduces an astonishing diversity of capabilities, but will allow future applications to monitor and "traffic-steer" their respective network slices. In this way, application management and network management are converging.

One of the most promising developments comes from the O-RAN Alliance, the industry association advancing virtualized OpenRAN technology. It has introduced the concept of the RAN intelligent controller, or RIC. Meanwhile, the ETSI is promoting standardized multi-access edge computing (MEC) platforms that will communicate with RIC.

Early RIC products are available from a range of independent software vendors, and in June 2021

In a test laboratory, the companies increased the capacity of a 5G cell site by two-fold using a programmable, Artificial Intelligence (AI)-based RAN Intelligent Controller (RIC) supporting a mix of Open RAN components from multiple vendors.

The RIC architecture… is fundamental in creating an open framework designed to further improve the cost-effectiveness of Open RAN, as well as expanding supply chain diversity, and promoting innovation.

As a prime system integrator for open, multi-vendor telecom networks and edge solutions, Atos is closely monitoring these developments and developing innovative use cases that will enable our clients to convert 5G’s new capabilities into increased business value and performance.

By Franz Kasparec, Head of global digital infrastructure and cybersecurity offerings management in the telecommunications and media industries.