A Digital Vision for making net zero a reality 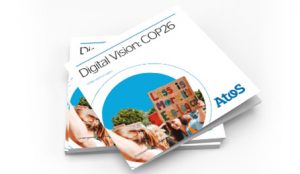 Atos has published its latest opinion paper, Digital Vision: COP26, which examines the pivotal role of digital in making net-zero a reality. The report illustrates the power of digital technologies such as AI, machine learning and supercomputers in transforming economies and industries to accelerate decarbonisation and achieve a successful transition to net-zero.

Digital Vision: COP26 also outlines a case for broadening access to data-driven technologies, such as the Internet of Things (IoT), blockchain and digital twins, which provide businesses with shared platforms and measurement tools that allow them to work together on understanding and reducing the Scope 3 emissions generated through their value chains.

Officially announced after the unveiling of Atos’ new decarbonisation portfolio and Center of Excellence – which will offer unique capabilities to enable and accelerate businesses’ journeys to net-zero – the report brings together expert views from Atos as well as senior figures from the worlds of business and politics.

Digital Vision: COP26 addresses the urgent need for collaboration between governments and businesses to ensure promises made in The Paris Agreement in 2015 and later this year at COP26 are met and consumers’ changing expectations delivered on.

Contributors include Chief Executive Officer at techUK Julian David and Director of Infrastructure and Energy at CBI Tom Thackray, as well as Atos Head of Financial Services & Insurance Adrian Gregory.

Clay Van Doren, CEO UK & Ireland at Atos, also a contributor to the paper, said, “While significant progress towards cutting emissions has been made, the pace of this change is far behind what is needed to avoid catastrophic climate change becoming a reality. Ahead of the COP26 Summit later this year– the most important milestone in the global fight against climate change since the 2015 Paris Climate Agreement – Atos has dedicated its latest Digital Vision paper to examining the critical role digital can play in making net zero a reality. This report shines a light on how digital solutions will be one of the most powerful tools to achieving a decarbonised future.”

Andrew Griffith MP, UK Net Zero Business Champion, said, “Technology and firms like Atos have a huge role to play. At heart this is a challenge of using the world’s finite resources in the best possible way. So whether that is smarter cities, data-driven government, or even quantum powered computer algorithms, digital technology is a huge enabler.”

The Digital Vision: COP26 paper further cements Atos’ position as a leader in secure and decarbonised solutions that provide value to businesses and society. The company is ranked number 1 in sustainability performance within the IT services sector in both the World and Europe Dow Jones Sustainability Indexes (DJSI).

As part of its own mission, Atos aims to reach net-zero emissions by 2028 through reducing the global carbon emissions under its control and influence by 50% by 2025 – a trajectory 22 years ahead of the 2050 target set by the Paris Agreement to limit global warming to 2°C by 2050 above pre-industrial levels.