Atos peaks in customer satisfaction in Denmark in new survey

Atos, a global leader in digital transformation, announces today that it was ranked in the top in customer satisfaction amongst IT service providers in Denmark in the most recent edition of the annual IT Outsourcing Study, conducted by Whitelane Research. For the first time, Atos, headquartered in France, leaves its global competitors behind, taking first place with Indian TCS. The result is a direct consequence of the company’s ambitious Nordic growth strategy and intense internal efforts to foster a customer-centric work culture. 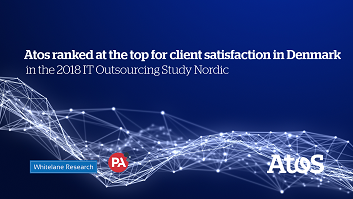 The annual report from Whitelane Research about customer satisfaction amongst IT service providers evaluates 32 different IT service providers and ranks them in accordance with their customers’ opinions about them. It is a significant report that serves as a reference framework for the entire industry. With a total satisfaction score of 80%, the French IT service provider Atos is in front of most of its local and global competitors. Atos shares the top ranking with the Indian IT company TCS (Tata Consultancy Services), which has dominated the ranking for the last four consecutive years.

There are several obvious reasons why Atos has managed to bring itself to the top of the field of well-known IT companies in Denmark. The company has positioned their offshore resources close to Poland and Romania, and they have a model that quickly allows them to retrieve relevant specialists from Germany, Poland, Romania, the Netherlands and Nordic countries. Atos, headquartered in France, is strongly rooted in Europe, with a deep understanding of the European and Nordic mindsets, culture and traditions, which distinguishes the company from their largest American and Indian competitors.

However, the Country Manager of Atos Denmark, Peter Vermehren-Poulsen, does not have a doubt about what ultimately secured Atos a top ranking in this year’s Whitelane report. Atos has focused on a strongly customer-centric work culture:

“We have worked intensively with the culture that puts the customer first. Over the last 20 months, we have consistently succeeded in customer satisfaction as an integral part of our overall growth strategy. For this purpose, we have created seven customer-centered rules of conduct that all employees follow every single day. The most important of these rules is the fact that we always create value for our customers”, says Peter Vermehren-Poulsen.

The numbers speak their own clear language. The targeted effort under Peters Vermehren-Poulsen’s leadership has provided Atos no less than seven consecutive quarters with profits in Denmark. At the same time, figures from the Great Place to Work report show that the satisfaction of the company’s employees has grown by just over 25% in two years: from 50% in 2015 to 74% in 2017.

“We have found the right formula that combines customer satisfaction and employee satisfaction with a solid profit on the bottom line. And that means that we now have all the right prerequisites for growing and increasing our footprint significantly in the Nordic market”, says Peter Vermehren-Poulsen.

The top ranking is paramount

As a business, you must have at least eight evaluations from satisfied customers to be included in the Whitelane Research report, and Atos succeeded better in the ranking than its closest competitors. Peter Vermehren-Poulsen is in no doubt about the importance of this ranking at the top of the list:

“Our top ranking on this year’s list means everything. In the past, it was far more difficult for customers to change service providers. But that time is over. We are in a highly competitive market under constant change, and if your company is unable to consistently deliver the highest quality service, your customers will just transfer to one of the competitors“, Peter Vermehren-Poulsen says.

“The road to a rock-solid failure is paved with fear, nervousness and micro management. You simply need to create trust and inspire your employees if you are to have good results. And then you must learn from your mistakes. I am incredibly pleased and proud of my colleagues, who have succeeded to handle their jobs“, Peter Vermehren-Poulsen concludes.