The magic number is two

In times of unpredictable disruptive changes, resilience is a must-have quality to survive and thrive. But how can you achieve it?

Organizations are not yet fully leveraging approaches from fields such as probability, forecasting (unpredictability), complex decision making (uncertainty) and risk management.

In this blog post, you will find three such approaches – all related to the number “two” – giving you actionable levers to improve predictability.

In times of unpredictable disruptive changes, resilience is a must-have quality to survive and thrive. Here are three actionable approaches to achieve it.

In his book “Thinking, fast and slow”, Daniel Kahneman summarized his research on decision making and behavioral economics. A key concept was that human thinking results from the brain working as two separate and markedly different systems.

System 1 is what makes you run for shelter when startled by a loud noise. System 1 is fast, experiential, effortless, automatic, opaque and emotional. It produces shortcuts that enable you to function rapidly and effectively, at the expense of producing biases – that is, wrong decisions – when used outside life-or-death situations.

System 2 is what makes you properly plan your career or investments. System 2 is thoughtful, effortful, reasoned, slow, logical, self-aware. It makes fewer mistakes, and it enables you to retrace your steps and correct mistakes if necessary.

System 1 is fast, easy and automatic, so we are often unaware that we’re using it. Most human mistakes in reasoning come from using system 1 when we believe we are using system 2.
Good decision making is vital for resilience, so we must do our best to use system 2 and detect when we’re inadvertently using system 1.

We tend to think in simple, linear, causal terms. A causes B. B is the consequence of A. Thus, if you want more of B, you do more of A. And you’ll stop doing A altogether if you want to avoid B. If that sounds too simplistic, it’s because it often is.

Firstly, the world is complex. In complex environments, events are hyperconnected in convoluted ways, so causality may be hard to establish and harder to control. That’s what chaos is all about: a small change in a parameter may cause huge, unexpected changes in another.

Secondly, A and B do not exist in isolation. There are C, D, E… Consequences of an event are, in turn, causes of another event. You mustn’t stop at “let’s increase A to get more B”. You must think “What will happen then?” That’s second order thinking.

Our world is plagued with the negative consequences of near-sighted first order thinking. For example, a town that got rid of “awful” bats, later suffered an invasion of mosquitoes – which no longer had a predator!

In his book “The black swan”, Nassim Taleb provides a framework to classify the type of environment in which we are making a decision, to avoid making predictions or using models in an area where they are useless or extremely deceiving.

First you need to determine whether you are in an environment in which extreme events are possible (wild randomness) or not (mild randomness). Business, economics, and investing are examples of wild randomness environments, causing inherent difficulties with modelling, predicting and decision making.

We summarize the framework in the following table: 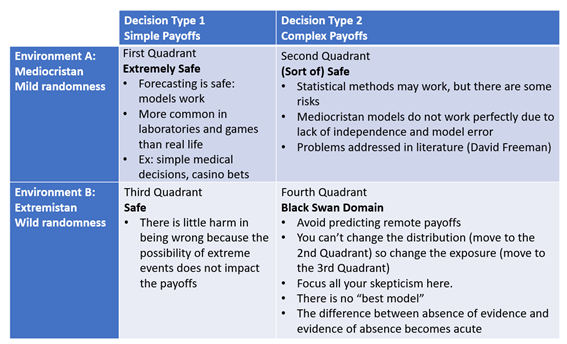 Table 1.- The fourth quadrants of decision making (from Taleb’s “The black swan”)

If you are in the fourth quadrant, you are in a Black Swan environment which can deliver large events. When making decisions of type 2 there – which is frequent in business – you should be very skeptical of predictions and models. Instead, you should do your best to move to the third quadrant by changing your exposure to decisions of type 1. That way, even if you make the wrong decision, you will suffer limited harm because the possibility of extreme events will not impact the payoffs.

To achieve resilience, you can:

• Make sure you’re using system 2 when you’re thinking. Avoid quick, gut reactions whenever possible.
• Always apply second order thinking. What are the consequences of the consequences?
• Always check whether you’re making decisions of type 2. If you are, a Black Swan event could occur, and prove all your models and forecasts wrong – with fatal consequences!

If you know and practice other levers, let’s start a discussion in Twitter! (#DigitalResilience #AtosSC @Atos)

By Jose Esteban Lauzán,Head of Innovation at Atos Iberia, founding member of the Atos Scientific Community and Atos Distinguished Expert

About Jose Esteban Lauzán
View all posts by Jose Esteban Lauzán
Head of Innovation at Atos Iberia, founding member of the Atos Scientific Community, Atos Distinguished Expert and member of the Scientific Community
José is the Head of Innovation at Atos Iberia, Editor-in-Chief of Journey 2020, founding member of the Atos Scientific Community and Atos Distinguished Expert. He is passionate about Innovation and how it can transform business. Jose leads innovation activities in Spain & Portugal, including Innovation Workshops, pilots, proofs of concept and events or the Employee Start-Ups initiative. He leads the Systems & Solutions domain at global level. He also collaborates with the Executive Committee on corporate initiatives, with R&D and Markets in the transfer of successful results to the Atos portfolio, and with Legal departments in IP-related initiatives. José started his career as a researcher at university (simulation, DSP) and innovator at the Spanish Medicines Agency (leading its transformation into an electronic organization). He joined Atos in 2000, as chief engineer, manager of R&D teams and coordinator of large international projects in eHealth, natural risk management, video and human language technologies.