About 40 companies. Two space agencies. Almost 25 years. The Solar Orbiter story is an extraordinary one. We’re around 15 years into the mission with, as I explained in my earlier blog post, Solar Orbiter embarking on a 10-year long journey exploring our sun. Atos is proud to have been part of this special mission.

A long – and extreme – journey

These kinds of space missions, particularly these scientific missions, are extremely long journeys. The idea for the Solar Orbiter mission was first put forward and selected by the European Space Agency (ESA) in around 2000. ESA awarded Astrium UK (now Airbus Defence and Space UK) the contract to build the spacecraft around eleven years later. The company contracted around 40 partners from across Europe to help to build the spacecraft.

Our role began shortly after, following Astrium UK awarding us contracts to simulate critical systems. A team of around 20 from our 150-strong space division has been working on the Solar Orbiter project since 2012.

Power and tests during construction

Firstly, there’s the specialist power equipment that powered during construction Solar Orbiter whenever its solar panels are unable to do so. With the solar panels and batteries not integrated until late in the spacecraft’s construction, our power equipment played a critical role from day one of the build. Permanently close by, it was always on hand to meet the evolving spacecraft’s energy requirements.

But the power equipment was not our only focus. Our main role has been in providing the test equipment for use during construction: the power checkout system, the simulator front end, and the ‘suitcase.’

Furthermore, our test equipment simulates Solar Orbiter’s hardware and software in terms of the onboard computer. During the build, it firstly allowed designers to understand how the craft might behave during its journey. Its second role was to allow contractors to build and test their various components. A simulation was shared with some contractors so they could integrate their parts with the virtual replica of the orbiter. 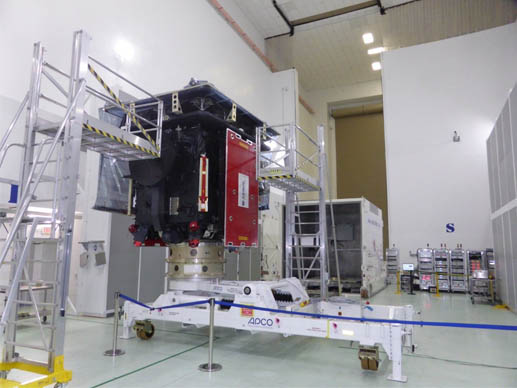 Spacecraft in the construction and testing phase - Image courtesy of ESA

Our power checkout system simulated the solar panels along with the batteries that store the power they Solar Arrays generate. It simulated, among other things, the tilt of the solar panels they will make as they near the sun – a measure needed to protect the very delicate solar panels that would otherwise not be able to withstand the sun’s immense heat. It also simulated the behavior of the battery – how it charges and discharges to protect against current or power overloads – and the process of switching from solar to battery power.

Our simulator front end simulated Solar Orbiter’s onboard computer. The onboard computer not only receives, unpacks, and executes commands sent from Earth but also sends data back to Earth (telemetry) on the health of the spacecraft. A simulator is normally supplied to the various component manufacturers and the instrument developers during the spacecraft build. It comprised two parts: the software that simulates how the on-board computer behaves, how it reacts to various commands and more, and the hardware needed to communicate the simulated results to and receive the answers from the peripheral devices.

Our journey is not over yet

Our mission may be over once the launch has passed, but we’ll keep our equipment running in case there are any anomalies during the flight. While our simulators are not normally needed post-launch, if there is an unknown anomaly on the spacecraft, they can recreate the environment needed – the front end, for instance – to resolve the issue. And if there is an anomaly at a ground station, we could send the suitcase to that station to help resolve whatever is going wrong.

Solar Orbiter is not our only mission into space. We delivered similar equipment to the Exomars mission to land a rover on Mars to explore the surface, with the addition of a full telecommunications checkout system. We also delivered the same equipment to JUICE, the mission to explore Jupiter and its icy moons. And we are starting our mission to support ESA’s ‘Plato’ mission, which will explore planets outside our own Solar System.

Watch this ‘space’ for more on our role in missions exploring our Solar System – and beyond.

About Hans-Martin Steiner
View all posts by Hans-Martin Steiner
CTO Space & Avionics
Hans Martin Steiner is currently CTO of Space & Avionics at Atos IT Solutions and Services GmbH Austria and as such responsible for the global product and solution portfolio of the space and avionics business activities of the multi-national Atos company. Hans is a Computer Scientist by education. His professional career started in the late eighties in the telecom sector. Soon after he switched to the newly formed Space Business Unit of Siemens. He had various management posts at Siemens in the space domain, particularly, he was several years on-site manager of Siemens space activities at ESA/ESRIN in Frascati/Rome. In 2007 he took over the position as Director of Siemens Space and in 2013 he became Vice President of Siemens Space. At the same time Siemens Space and other units were carved out of Siemens to become Siemens Convergence Creators, a 100% subsidiary of Siemens. In 2018, after the acquisition of Siemens Convergence Creators by the Atos Group, Hans assumed his current CTO position. Hans is Managing Director of Austrospace, the Association of Austrian Space Industries, as well as a member of the Advisory Board of the Austrian Research Promotion Agency (FFG).

Making smart manufacturing in Biopharmaceutical a reality
How to get your C-suite on board with SAP Cloud migration
Be the CEO of your career and drive it further
Is it time to rethink your buy now pay later (BNPL) business model?