We all know that city dwellers are obsessed with their smartphones, but that’s not our focus today. Instead, we will examine two emerging technologies we believe have potential in urban settings: small cell sites and neutral hosts.

Before our country-dwelling friends object, I want to point out that there is a lot of innovation in rural telecom — a topic we will discuss in a subsequent article. For now, we will focus on urban 5G because unlike rural deployments, urban areas can offer ROI big enough to justify mass deployment and generate economies of scale. Let’s get to it.

A wide range of 5G services – whether for data or multimedia communication – are about to be offered on top of 5G, justifying network investment. Powerful central radio towers are becoming less and less the rule as dense networks of small radio cells take their place.

This development has technical and societal reasons. Urban concrete structures cast radio shadows, especially with highest-frequency millimeter wave systems. A mesh of low-power 5G stations – some of them indoors – is the only technical fix. At the same time, society is becoming less enthusiastic about powerful macrocells, especially since safety distances between radios and residences are difficult to maintain in a metropolitan environment.

Even though Luddites also rage against small 5G cells, the scientific consensus appears to be that a mesh of small cells poses a significantly lower health risk than individual high-power broadcasting stations near residences. In fact, electromagnetic radiation emitted from small cells, handhelds and tablets can be compared in strength to the natural radiation from the sun and other sources.

Whoever may be right in the contest of opinions, a small-cell mesh not only provides better services in an urban environ¬ment, but also has biological advantages.

Small cells can be divided into three subtypes, as summarized below:

The small cell market was around $550 million in 2020 and is expected to grow at 77.6% CAGR, tripling about every two years. Following the math, by 2029 we can expect an addressable market of around $100 billion, about a third of which is likely to be indoor, partly replacing today's Wi-Fi.

Leading vendors like Nokia and Ericsson have invested heavily in small-cell product engineering, offering a range of modern indoor equipment which lends itself to private 5G networks for industrial IoT and other enterprise purposes, which I discussed in a previous blog post.

While a dense mesh of small cells is needed for proper urban 5G coverage, multiple meshes run by competing operators are needless. They are not even needed for reliability and multi-vendor business continuity, because well designed small-cell networks are inherently redundant.

Does this mean that the first operator who builds an urban 5G system obtains a monopoly? Not quite! The fact that 5G allows for network slicing and that overloading one slice does not compromise the other slices allows for a separation of 5G transport and 5G user services (voice, data, multimedia, whatever).

A 5G transport system that caters to multiple service providers is called a neutral host. It implements multi-tenant 5G transport, meaning each tenant gets their slice.

This layering follows another recent trend in the telecom industry: separating the service business from the cell site infrastructure business, spinning off the latter onto tower companies. Because there are no towers in an urban small cell environment, it makes sense to combine the small cells of the 5G radio access network (RAN) with 5G core operations, and handle user services separately.

The model is not without pitfalls. Can the operator of a 5G transport system be forced to run their system as a neutral host, opening it to multiple tenants competing for user services? If so, would they unfairly favor the neutral host operator's own services business?

What if expectations of the network and its coverage differ between tenants specializing in different service types, such as low-latency communication services for self-driving vehicles or enhanced mobile broadband for mobile TV?

There is reason to be optimistic, since the sub-provider business is already established in LTE and works commercially.
5GCity has developed an architectural concept for the neutral host that separates tenants by way of network slices and network virtualization through a software-defined network, or SDN. They are also preparing for the future, when multi-access edge computing (MEC) will be dominant:

The 5GCity Neutral Host infrastructure dashboard allows operators and interested parties to develop slices using a set of virtualized resources according to their needs. [It] also enables SDN-based virtual RAN slicing and RAN function virtualization for 5G, LTE and Wi-Fi.

Interestingly, the neutral host model is widely accepted in rural areas as well, providing a way to share infrastructure cost among multiple providers and reduce the cost-to-consumer ratio in rural 5G.
What this means for network operators
Potentially, the biggest impact of small cells and neutral hosts is the proliferation of Open RAN, which I discussed thoroughly here.

In her article on multi-operator RAN (abbreviated as MORAN) author Shin Yuan Kee predicts that by 2030, Open RAN will command approximately 60% of a $50 billion market that includes all RAN deployments lumped together. In 2026, she expects Open RAN to account for less than 40%.

In contrast, the Small Cell Forum expects Open RAN to dominate small-cell installations with 80% of deployments by 2026, as shown in the chart below. In small cells, O-RAN adoption is stronger and faster. 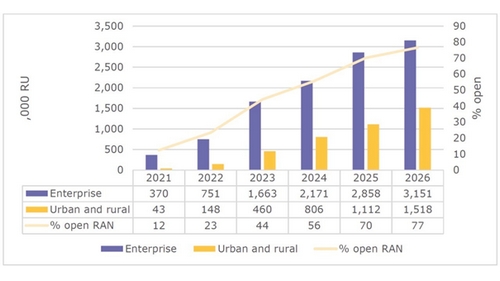 The dominance of Open RAN in small-cell deployments

How is that possible?

According to the Small Cell Forum, open architectures are likely to be adopted at scale first in small cell networks, especially enterprises and smart cities, because these will be largely greenfield roll-outs, often by non-traditional operators. That means the impact of the open network can be maximized because there is no legacy to manage … and the operator does not face the cost and risk of transitioning an installed macro RAN to a brand new architecture.

A good command of technology and a successful market strategy will make the difference between success and failure.

By Franz Kasparec, Head of global digital infrastructure and cybersecurity offerings management in the telecommunications and media industries

How to Get Your C-Suite On Board with SAP Cloud Migration
How moving SAP to the Cloud on Azure benefits all areas of an enterprise
SAP cloud transformation: Hype or really a transformation
What future for the security of communications?