The project “Sustainable Digital Transformation of the Olympic Games”, delivered by Atos to the International Olympic Committee (IOC), has been selected as the winning project of the “SMART IT Infrastructure” category of the EnerTIC[i] awards 2018, held last December.

Atos’ project, developed for the IOC, has been recognized by enerTIC during its annual prize ceremony. The Olympic Winter Games PyeongChang 2018 were the first Olympics to have all critical IT applications remotely managed by Atos and hosted over Atos Canopy Orchestrated Hybrid Cloud. Atos’ new delivery model, centralized over the Cloud, has enabled several benefits:

The EnerTIC Awards 2018, in its sixth edition, rewarded innovation and technology for energy efficiency in the digital age. The awards aimed to identify organizations which have implemented innovative technological solutions to improve energy efficiency and sustainability with a specific use case. The awards were divided into several categories, amongst which figured “SMART IT Infrastructure”, focused on the use of devices with lower energy use to manage overall consumption of large Information & Communication Technology (ICT) infrastructures. 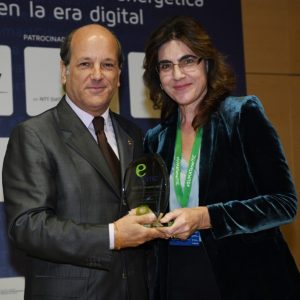 Supporting the IOC in delivering the most sustainable solutions ever

As Worldwide IT partner for the Olympic and Paralympic Games since 2001, Atos ran and orchestrated the key IT systems that helped secure the success of the Olympic & Paralympic Winter Games PyeongChang 2018 and has led the way in terms of digital innovation by bringing real-time results to the world’s media for all 15 disciplines and 102 events of the competition. Atos will now re-use this Cloud-based platform to increase efficiency and flexibility, reduce costs and minimize the environmental footprint of the Olympic and Paralympic Games Tokyo 2020.

[i]enerTIC is a group whose mission is to contribute to the development of transformation of Information and Communication Technologies (ICT) in the field of energy efficiency in Spain with the support of several companies and public institutions, in favor of a more competitive and sustainable economy.