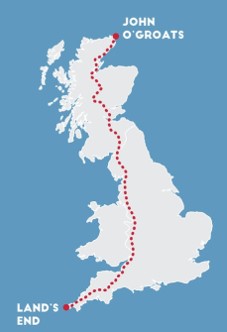 On 19 August, Atos 2020 Million Makers team, Team Empower, launched its Virtual Atos Expedition initiative. The expedition saw 230 Atos employees from across the UK and Ireland race against each other virtually to complete the entire 1407.5km distance of the UK - from Land’s End to John O’Groats - over three weeks. Employees could partake in a choice of over 40 activities such as yoga, horse riding and trampolining to achieve this significant distance by converting their activities into kilometres based on their intensity.

Over those three weeks, 19 teams managed to complete the challenge, with the fastest team finishing in a total of four days and 12 hours. Overall, the expedition raised over £11,000 for The Prince’s Trust, a charity that aims to change the lives of young, vulnerable people by supporting them to build the confidence and skills they need to move into work, education or training, despite their challenging circumstances.

Million Makers is a ‘dragons den’ style fundraising challenge which sees teams of employees from companies across the UK competing to raise funds over a period of six months.

Find out more about Team Empower and how we support The Prince’s Trust at Atos.