As members of the Atos Scientific Community, we research future digital themes in dedicated research tracks. We have spent the last two years researching quantum computing developments for our recently released publication, Unlocking Virtual Dimensions. This hyped and still emerging area of technologies promises to revolutionize computing. However, this will not only require further advances in hardware, but the development of software underpinned by quantum algorithms to address specific computational requirements.

Quantum computers are not general-purpose devices that will replace today’s computing solutions en masse; they will supplement or replace them for certain tasks only, where there is an identified and proven benefit. This is what we explore — seeking out specific use cases across industries (such as manufacturing and finance) where we believe quantum computing will be a good fit.

However, it’s not all about computing power. Quantum plays a role in sensor networks, surveillance, communications and in security. It will also underpin future accurate timekeeping.

The importance of time

Many years ago, a friend of mine was pursuing a master’s degree in physics. His research topic was on something called the Global Positioning System (GPS), which relied on satellites in space. I was incredibly impressed. Of course, we all know how useful it is today; its use is ubiquitous, but what captured my imagination back then was that the entire system had to take into account Einstein’s theories of Special and General Relativity.

A GPS device calculates (using trilateration) your position using incredibly accurate time provided by atomic clocks on the satellites and by taking into account the speed of light for messages traveling from the satellites to the devices via radio waves. Special relativity matters here because of the speeds at which the satellites are orbiting (14,000 km/h) the Earth. This has a time dilation effect on the clocks residing on the satellites, causing them to run slower than those on Earth. General relativity, on the other hand, causes these clocks to run faster due to the curvature of spacetime 20,000 km above the Earth’s surface. The latter has a larger effect and the net result is that clocks on the satellites are running approximately 38 microseconds faster than those on Earth. It doesn’t sound a lot, but if left uncorrected it would cause a 10 km deviation in distance calculations every day!

Each GPS satellite has four atomic clocks on board to maintain time accuracy. Even so, time can drift, and it is imperative that all satellites are precisely synchronized. Quantum technology is underway to improve this synchronization and provide better positional accuracy. 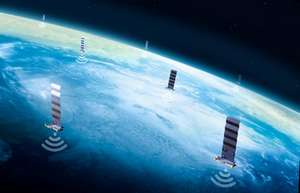 Keeping clocks synchronized using classical techniques (such as Einstein or Eddington protocols) relies on either light or matter being exchanged. This has several drawbacks, including proximity requirements, errors due to translation and transportation of information, and security risks. Can quantum technologies improve on this?

By creating a distributed network using quantum communication technologies, information can be exchanged without (or at least with fewer of) the issues outlined above. A quantum clock network is comprised of atomic clocks with quantum technologies at network nodes. Qubit superposition and quantum entanglement across the network nodes enables qubits to be teleported and the instant correlations are used to synchronize the entire network.

This research is leading to other technological developments, including new quantum protocols for establishing synchronization, the optimal use of quantum memory to store time, and much more.

It is a fascinating activity to explore what will become possible with quantum technologies in the future. We are reaching the limit of what is theoretically possible in timekeeping and synchronization (the so-called quantum limit which has its foundations in Heisenberg’s uncertainty principle). These technologies can also be applied to systems other than GPS, such as communications networks, financial trading, airport traffic control and rail networks.

Ultimately, quantum time could enable a worldwide coherent time system which is perfectly synchronized everywhere on Earth — no matter where you are or how fast you are moving.

It would be a breakthrough of Gaussian proportions!