Atos is delighted to be announced a winner of the 2023 Intersec Cybersecurity service/product of the year award for its Managed Detection and Response service powered by the AIsaac platform.

The Awards, which recognizes people, products, and companies for exceptional performance across ten categories in the fire, safety and security industries, attracted almost 1300 entries. The esteemed panel of judges evaluated the Atos AIsaac platform capabilities along with Atos’ ability to deliver a comprehensive managed detection and response service.

With this award, Atos is adding yet another global recognition for its Managed Detection and Response service after recently being recognized as a leader in MDR services by Everest Group in their Pear Matrix Report and having been recognized in the Gartner Market Guide Report for MDR for five years in a row. 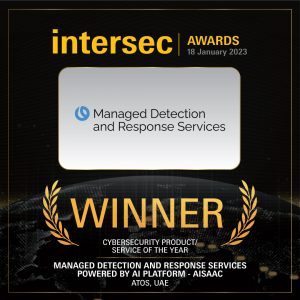