Led by Daniel Estève (1), the industrial research chair, named “Nasniq” (New nuclear spin architecture for quantum computing), aims to contribute to the development of the quantum computer, which can revolutionize how information is processed in the years ahead and can manage the explosion of data driven by Big Data and the Internet of Things. Quantum technologies represent a key factor for sovereignty which now requires a major effort in terms of research and development, bringing together academic teams and businesses.

To address this, Atos and the CEA-CNRS, with the support of the National Research Agency (ANR), will work in synergy and will contribute their expertise to this initiative.

Atos, a global player in supercomputing and European leader, will bring its expertise in high-performance computing and quantum computing to the industrial research chair. Indeed in 2016 Atos launched “Atos Quantum”, an ambitious quantum computing program that has already enabled it to bring to market, as of July 2017, the “Atos Quantum Learning Machine” (Atos QLM), the world’s first machine capable of simulating up to 40 quantum bits and which now simulates physical Qubits for increased performance.

Daniel Estève and the “Quantronic “group, from the Condensed State Physics Department (Spec, CEA-CNRS, Paris-Saclay), are pioneers in the knowledge and control of quantum information. This group founded the so-called Cooper pair box circuit that has led to superconducting quantum bits which are used today.

The Nasniq research chair will combine the essential research efforts carried out by the Spec team (CEA-CNRS) with Atos’ developments in algorithmic simulation, further reinforcing the synergies between all the activities of the CEA in this field. In addition, the chair will allow to monitor technological developments in the appropriation of this innovative field. 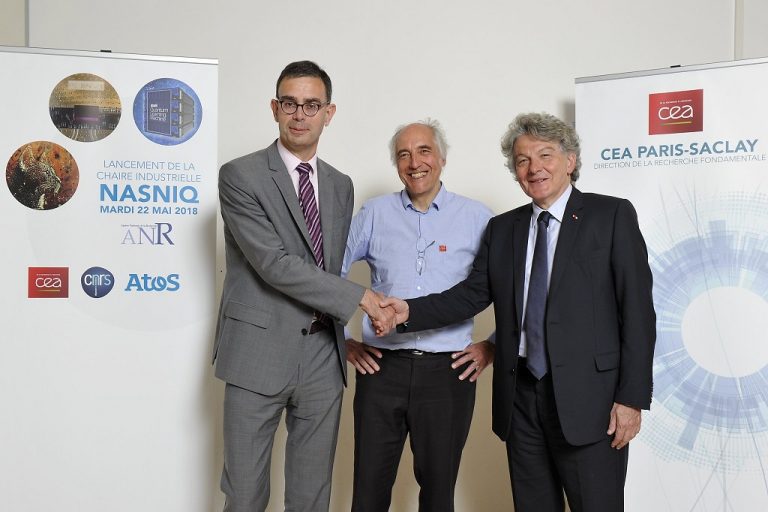 “International competition has accelerated dramatically in recent months in the field of quantum computing. The Nasniq chair is the opportunity for the CEA and Atos to extend their already existing partnership in the field of high performance computing in quantum computing. It will also allow us to position our teams more favourably in future European calls on quantum engineering, within the framework of the European Commission’s flagship Quantum Technologies or the 9th Framework Programme”, said François Jacq, General Manager of the CEA.

A Basic and Applied R&D program

By strengthening the interaction between research teams and industrial teams, the Nasniq chair will also be able to train future engineers and researchers in the field.

The French Alternative Energies and Atomic Energy Commission (CEA) is a key player in research, development and innovation in four main areas: defence and security, low carbon energies (nuclear and renewable energies), technological research for industry, fundamental research in the physical sciences and life sciences. Drawing on its widely acknowledged expertise, the CEA actively participates in collaborative projects with a large number of academic and industrial partners.

The CEA is established in nine centers spread throughout France. It works in partnership with many other research bodies, local authorities and universities. Within this context, the CEA is a stakeholder in a series of national alliances set up to coordinate French research in energy (ANCRE), life sciences and health (AVIESAN), digital science and technology (ALLISTENE), environmental sciences (AllEnvi) and human and social sciences (ATHENA). In 2017, Thomson-Reuters / Clarivate identified the CEA as the most innovative public research organization in Europe. As regards the processing of quantum information, the CEA is developing two main areas of research: qubit-tolerant fault architectures in silicon CMOS technology and the development of qubits of high robustness.

The ANR provides funding for project-based research in all fields of science – for both basic and applied research – to public research organisations and universities, as well as to private companies (including SMEs). Employing a method based on competitive peer reviews compliant with international standards, ANR provides the scientific community with instruments and programmes promoting creativity and openness, and stimulate new ideas and partnerships, particularly between academia and industry. Its activity also contributes to enhancing the competitiveness and the influence of French research in Europe and across the world.