Atos, a global leader in digital transformation, today announces the winners of its international student competition, the Atos IT Challenge, at a ceremony presided over by Thierry Breton, Chairman and CEO of the group. In its sixth year, the competition saw 77 teams from around the world compete on the theme of the Blockchain.

With 77 teams made up of more than 240 students from colleges and universities in Africa, Asia, Europe and North America, the 2017 edition of the Atos IT Challenge confirmed the buzz surrounding Blockchain technology worldwide.

After an initial first round in which 17 applications, submitted from the United States, France, UK, Germany, India, Russia, Malaysia and even Singapore, were selected, the Atos IT Challenge Board, made up of media personalities, experts and Atos executives, chose three finalists. These are: 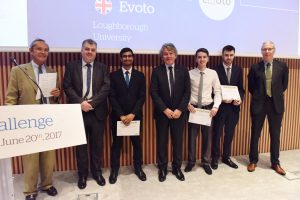 With an application called 'Quo', three English students from Lancaster University have developed a visual tool to intuitively create ‘smart contracts’ that anyone can deploy, without ever needing to write a single line of code. By addressing such a broad audience, the team took on the challenge of widening access to Blockchain.

The team won €10,000 and each student was offered the opportunity to either do an internship at Atos or to work together with the company to develop their project.

The aim of this app "Evoto", created by three English students at Loughborough University, is to encourage and secure digital voting in organizations (companies, unions, institutions) using Blockchain technology.

The team won €5,000 and each student was offered the opportunity to either do an internship at Atos or to work together with the company to develop their project.

To tackle the spread of fake tickets to shows or sporting events, three French students from French engineering school Enseirb-Matemeca developed the 'E-tickets' app, which uses Blockchain technology to ensure authenticity of the tickets.

The team won €3,000 and each student was offered the opportunity to either do an internship at Atos or to work together with the company to develop their project.

In addition, for the first time in the history of the competition, the jury awarded a 'special price' to a team whose project was particularly advanced, and which could be considered for a partnership with Atos.

At the end of the ceremony, Thierry Breton, Chairman and CEO of Atos, said: "I am impressed by the quality of the contributions of the award-winning finalists today. Hundreds of young scientific students from around the world have shown some outstanding creativity throughout the competition. Blockchain technology is going to revolutionize the payment and transaction industry over the coming years and more widely, all sectors of economy and society. By offering innovative and concrete solutions that meet the needs expressed by individuals as well as businesses, the contestants in the Atos IT Challenge showed real entrepreneurial skills, which are at the heart of our values at Atos.”

Since its creation in 2012, the Atos IT Challenge has enabled students from around the world, supervised by members of Atos Scientific Community which provided advice and encouragement, to develop applications connected to major trends in the digital revolution, such as mobility (2012), the connected car (2013), interactive media (2014), connected life (2015) and even the Right to be Forgotten (2016).