Organized by the “Observatory for a New Social Dialogue” (a new club from the RH&M Group, a distinguished HR think tank since 1998), the Social Dialogue Awards recognise, each year, a company that has rolled out an innovative project in the area of social dialogue, that is both significant and exemplary. 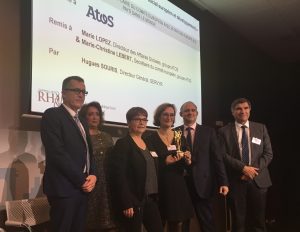 At the 4th edition of this awards ceremony, held on Thursday 12 October, Atos won the Award for the European Social Dialogue and Development 2017 for work by its European Works Council, the Societas Europea Council (SEC). The SEC is the body representing all European employees of the Group, i.e. more than 63 000 employees.

A key driver for the development of employees, this ongoing European social dialogue has accompanied the growth of the Atos Group, global leader in digital transformation, which has seen its workforce and its turnover more than double between 2008 and 2017, to reach around 100,000 employees worldwide and 12 billion euros revenue today.

With 39 representatives from 25 European countries – appointed or elected dependent on local regulations – the SEC meets on average once a month, well beyond the three annual meetings provided for in the agreements, in order to meet all requests. A representative from the SEC is also involved in the work of the Atos Board of Directors.

Additionally, the expert committees have multiplied over the last three years in order to cultivate this constructive European social dialogue. The SEC works closely with the Atos management teams to share and develop recommendations on all the Group's strategic projects:

Commenting on the award, Philippe Mareine, Executive Vice-president at Atos in charge of Human Resources, explains: “Sharing, involving, engaging the social partners in the projects are key factors in the success of the Atos Group. This award recognises the close collaboration between our European social partners and the entire Group management team, marked by the sharing of views and in-depth discussions with the members of the SEC, key stakeholders in the development of our company and our employees.”

Marie-Christine Lebert, Secretary of the Atos European Works Council[1], adds: "A forum for rich and respectful discussion, the SEC promotes the anticipation and the shared understanding of the many and complex developments inherent to a group that grows quickly. The performance of the projects and the company is optimised by how well we listen to the employees’ voice. The award presented today reflects the exemplary social dialogue within this forum.”

The trophy was awarded to Atos by Pierre-André Imbert, Social Advisor to the French President.