Atos has been investing in young talent for many years now and has built fruitful relations with several universities. This includes four universities in Poland: University of Technology and Life Sciences, the Kazimierz Wielki University, both in Bydgoszcz, the Opole University of Technology and the University in Zielona Góra. Atos also recognizes the potential talent of even younger pupils, those from the ages of 16-18 and has formed a partnership with a high school in Bydgoszcz to build and enhance relationships with young digital natives and make them aware of career possibilities in the digital world.

“We care about building social awareness not only amongst graduates from our partner universities, but also amongst their peers from other classes. Our ambition is to promote the skills needed to develop IT services in the region. Good knowledge of foreign languages, not just English, and being an expert in the IT world will help develop the market in Poland” said Jacek Przybylski, Head of Workplace Services at Atos Global Delivery Center in Poland. 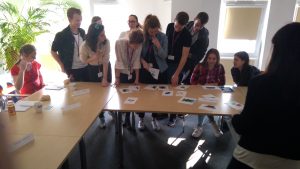 Following on from the Atos Excellence program, a training series which has been running for three years for high school students, Atos has decided to go one step further and expand the program to include additional hours of mathematics, computer science and two foreign languages: English and German or French, thereby equipping students at High School n° 2 in Bydgoszcz with the most sought-after knowledge and skills in the job market.

“Our school has been famous for its high level of teaching for many years. We have a long tradition in teaching top-level languages ​​with experienced pedagogues” - says Zbigniew Kujawski, Director of High School n° 2 in Bydgoszcz.

During the training program, which runs over three years, students will have close contact with Atos, through IT courses co-chaired by company professionals, workshops at school and offices and summer internships. Emphasis will be placed on practical learning, not only in computer science but also in foreign languages.

“It is worth emphasizing that enabling students to gain practical knowledge and first-hand experience in the IT industry is not the only goal. It is equally important to raise awareness amongst young people of the importance of choosing an educational pathway that will ensure stable employment in the future” says Patrycja Kublik, Head of Employer Branding CEE at Atos.

Atos’ collaboration with High School n° 2 is one of the first of its kind in Poland. It is not always the case that the education system keeps up with the requirements of today's labour market. This, combined with pace of demographic change in society; will likely make this type of collaboration more and more common.