At the 3rd Stock Market Awards Ceremony, which took place on Monday 27th February in Paris, the BFM Business editorial team recognised those business and investors who had the most impact on the stock market in 2016, as well as those who are set to be the most promising in 2017. 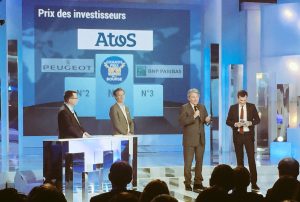 Atos was awarded the Investors Trophy, which recognises the company which is seen to have the greatest potential on the stock market in 2017. The trophy was awarded to CEO Thierry Breton, who was accompanied by Group CFO Elie Girard and Gilles Arditti, Investor Relations Director at Atos.

As chance would have it, the award ceremony came on the same day that Atos reached an all-time high of 112 euros.

This award also illustrated Atos’ stock performance since November 2008, when Thierry Breton took over as head of the group, and since which the market capitalisation of Atos has increased ninefold. 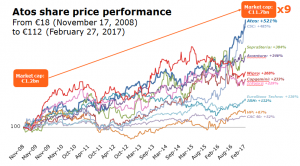