Atos welcomed over 300 attendees including Spanish Secretary of State for Sport, José Ramón Lete, as well as many partners and several top tier journalists to its De Rio 2016 a Tokio 2020 event held in Madrid this week. The event hosted together with the Spanish Olympic Committee and Tokyo 2020 worldwide partner Bridgestone celebrated the success of Rio 2016 and looked towards the digital transformation of the upcoming Olympics.

With less than 18 months to go until the Olympic Winter Games Pyeongchang 2018, and less than four years left until Olympic Games Tokyo 2020 all eyes are now on Asia to the Games that will be the first to be delivered 100 percent from the Cloud. 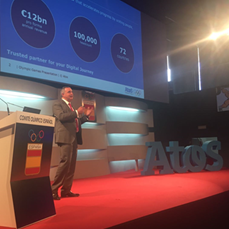 The event welcomed several key Spanish media including journalists from Cinco Dias, El Economista, El Mundo Innovadores and Radio National de España. In addition to announcing that all critical IT systems will be hosted from the Cloud, Atos also explained that there will be a new dedicated Atos Integration Test Lab in Madrid to manage all of the system testing, as well as a new dedicated Technical Technology Operations Center (TOC) in Barcelona which will remotely support the host city.