Atos, a global leader in digital transformation, is proud to engage with GENCI, the French national high-performance computing organization, and the CEA, a French public research organization, on the road to Exascale, with the delivery of a state-of-the-art Arm A64FX Fujitsu supercomputer partition in the Joliot-Curie supercomputer, to assist French and European scientists. Supported by the PPI4HPC project, this system setup will pursue the efforts already deployed since a few years on a low-power Arm-based HPC General Purpose Processor and its benefits to tackle HPC and AI future challenges.

Based on Fujitsu PRIMEHPC FX700 technology, the 80 single-socket Arm A64FX DDR-less compute nodes partition will be connected through Mellanox InfiniBand into the Joliot-Curie GENCI supercomputer. Joliot-Curie is a machine dedicated to French and European (PRACE) academic and industrial open research, hosted at the CEA’s Very Large Computing Center (TGCC). TGCC is a leading European supercomputing facility, whose operation and user support are ensured by teams of the CEA center in Bruyères-le-Châtel (91, France). 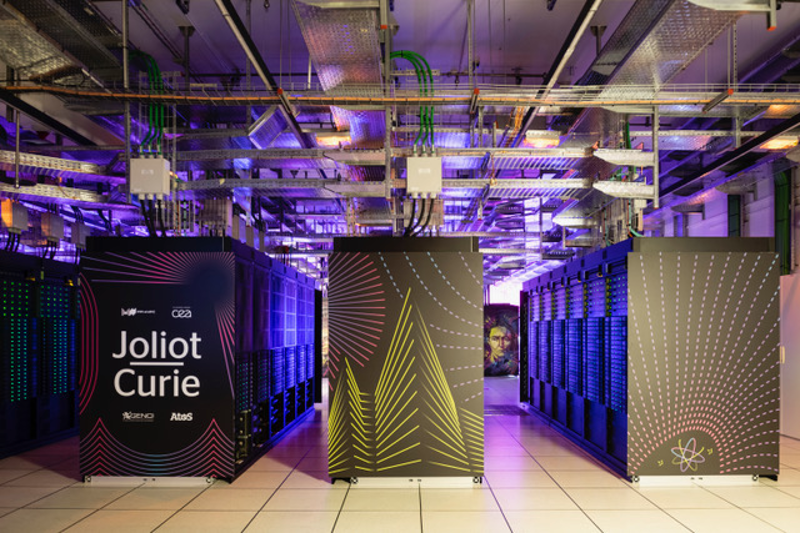 Atos will implement its BullSequana eXascale Interconnect (BXI), its networking technology used in Joliot-Curie, to integrate the Fujitsu PRIMEHPC FX700. Such a system will allow scientists to port and co-design their applications, using A64FX key features such as Scalable Vector Extension (SVE) instruction set or the use of HBM2 (32GB per node). Users will benefit from a complete Arm ecosystem built to efficiently manage compute data workflows with new perspectives, including the Fujitsu compiler to extract the most of the processor. This Arm Fujitsu system will also be made available in-kind by GENCI to the EUPEX (EUropean Pilot for Exascale) proposal, if selected by the EuroHPC JU. For EUPEX it will be a full testbed to support the development of a complete software ecosystem, from low libraries level up to applications, so as to prepare European users along an ARM- based path to Exascale. GENCI and the CEA have already engaged since a few years with the scientific communities to evaluate Arm ecosystem readiness on full-fledged representative leading applications (in climate, material sciences, earth Sciences, CFD/combustion). The A64FX engagement is one more big step forward for users to assess the potential of the Arm processors, including native Scalable Vector Extension benefit for numerical simulations.

Stephane Requena, CTO of GENCI, said: “The Exascale Journey started more than 10 years ago with GENCI’s involvement in the Mont Blanc European projects. Since that, we have done permanent efforts to support Arm adoption by the French scientific community and once more, thanks to the innovative PPI4HPC joint procurement and the partnership built with Atos and Fujitsu, we are proud to pursue the co-design of our next generation computing capabilities by providing users with the most advanced Arm technology available on the market to help them building their applications for the Exascale with trust and confidence”

Christine Ménaché, Head of the CEA's Very Large Computing Center (TGCC), said:“CEA, involved in an HPC collaboration with RIKEN/R-CCS since 4 years, dealing in particular with ARM-based HPC architecture, is now happy to work with Atos and Fujitsu on such perspectives.With this new innovative partition, CEA’s TGCC will provide end users with a reliable and efficient production environment, shared between the four other Joliot-Curie partitions currently running in production and intensively used by European researchers.”

Damien Déclat, VP, Head of HPC, AI & Quantum Business Operations at Atos, added: “Atos is proud to supply GENCI with this innovative solution, together with Fujitsu. It will enable innovative developers and end users in Europe to anticipate the exascale era, the use of next generation technologies and to start optimizing their applications. Such an approach will benefit HPC communities by maximizing the efficiency of their simulations with cutting edge technology and optimized environments.”

Naoki Shinjo, Corporate Executive Officer, Fujitsu Limited, said:” Fujitsu is very honored that the FX700, which utilizes the same technology as the world's 1st ranked Fugaku in June 2020, supercomputer jointly developed by RIKEN and Fujitsu, is selected and used as part of the France national supercomputer. We have high expectation that this project will lead to the development of the Arm based processor’s ecosystem by advanced researchers in Europe and end users looking ahead to the future exascale era.”

The Arm partition of Joliot-Curie is funded under the European project PPI4HPC (H2020-754271), which aims to acquire innovative computing and storage solutions, through a joint procurement coordinated by GENCI, for leading HPC centers CEA/GENCI, CINECA (Italy), JUELICH (Germany) and BSC (Spain). It comes in addition to the 22 Petaflops/s compute power capabilities already installed at TGCC/CEA based on Intel x86 Skylake, Intel KNL, nVIDIA V100 and AMD x86 Rome.

Atos is a global leader in digital transformation with 110,000 employees in 73 countries and annual revenue of € 12 billion. European number one in Cloud, Cybersecurity and High-Performance Computing, the Group provides end-to-end Orchestrated Hybrid Cloud, Big Data, Business Applications and Digital Workplace solutions. The Group is the Worldwide Information Technology Partner for the Olympic & Paralympic Games and operates under the brands Atos, Atos|Syntel, and Unify. Atos is a SE (Societas Europaea), listed on the CAC40 Paris stock index.

GENCI is a civil society under French law, 49% owned by the State represented by the Ministère de de l'Enseignement Supérieur de la Recherche et de l’Innovation (MESRI), 20% by CEA, 20% by CNRS, 10% by the Universities represented by the Conférence des Présidents d'Universités and 1% by Inria. Created in 2007 by the French public authorities, GENCI is aimed at placing France among the leading countries within Europe and on the international stage in HPC and AI. In this context, GENCI has the missions to implement the French national strategy by equipping with HPC and massive data storage resources the three national computing centres (TGCC for CEA, IDRIS for CNRS and CINES for CPU) in order to support scientific open research, to contribute building an European integrated HPC ecosystem and to promote AI, numerical simulation and HPC within the academic and industrial research communities.

The CEA is a key player in research, development and innovation in four main areas : energy transition, digital transition, technology for the medecine of the future and defence and security. With a workforce of 20,000 people, based in nine sites equipped with very large-scale research infrastructures, the CEA actively participates in collaborative projetcs with a large number of academic and industrial partners, in France, Europe and worlwide. According to the Clarivate 2019 ranking, it is the first French research organization in terms of the number of patents filed in France and Europe.