OK, so here’s the opening admission. I don’t ‘get’ Quantum, yet. It’s one of those fundamentals in physics which is hard to grasp beyond the basic, two concurrent states in one space/time. I guess I am in good company.

And when I dig around at the other end of the discussion, namely, ‘what will it do for us once it has been more fully realised in information technology’, I am struck by how broad the claims of benefit are.

I read about increased speeds, at least for certain kinds of algorithms, rendering today’s high performance computing a poor cousin for those kinds of problems.

Highly complex analytical tasks being carried out in the twinkling of an eye.

Solutions to secure data in a new way, once cryptographic methods have been outpaced by decryption carried out by quantum computers.

The potential for other as yet unimagined applications benefiting many spheres of human activity.

The development of a scalable quantum computing appears to have far to go. After all, the field only started to be defined and worked on in practical terms during the 1980s. By way of illustration, I read that many different models have been proposed for Quantum hardware including ‘trapped ions, cold atoms in optical lattices, liquid and solid state NMR (Nuclear Magnetic Resonance), photons, quantum dots, superconducting circuits and NV (Nitrogen-vacancy) centres¹’.

So, while the fundamental physics are being tested and refined, researchers have been busy developing Quantum Learning Machines (QLM) which, we are told, simulate what a Quantum computer will do when a one has been built and can operate at scale in a stable fashion.

These simulators, it is claimed, can emulate so accurately how a true quantum computer is predicted to behave, that the code written on a QLM would be directly transferable and work on one.

To get to grips with these startling developments, I set myself the task of researching and understanding better some of the basics, by asking, in no particular order:

A whistle-stop tour of explanatory papers, articles and graphical animations took me to ever-more fascinating places.

How atoms behave when subjected to different levels of energy.

How it’s not possible to know where a sub-atomic particle is at a point in time, only to predict where it might be.

How two quantum systems separated by unimaginable distances can be influenced one by the other.

Who I might be when I have written this paragraph.

So I will avoid the temptation to try and compress a century’s theoretical exploration into a short, lay person’s article and ask some rather more prosaic questions of moment to us working in Financial Services. 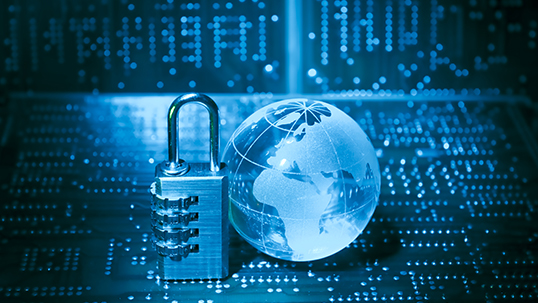 Some pointers from a paper and other material I came across throw early light on some of the anticipated impacts of quantum computing on the financial sector:

Firstly, why quantum is fundamentally different from classical binary computing.

‘Quantum computers make use of a quantum-mechanical phenomenon that allows data to be represented as “Qubits” – these are not constrained to conventional 0 or 1 binary values, but instead can be a combination (or superposition) of 0 and 1 at the same time. A set of Qubits is able to represent exponentially more values than their “Bit” counterparts – allowing them to interact and deliver computation and algorithm solving rates several orders of magnitude faster than with more conventional technology²’.

OK, so it can be faster. A lot faster. But only for certain kinds of algorithms³. And it’s fundamentally different from computing as we know it.
Secondly, where quantum computing is going to be applied.

Today’s cryptographic methods of securing data are expected to be breakable or at least weakened by quantum computing methods, so the development of post-quantum cryptographic solutions is required to safeguard the security and privacy of the financial system and of its institutions.
These are already starting to manifest in the development of Quantum Key Distribution solutions which use properties of quantum physics to secure transmitted data.

In short, we have to know how to secure it before we can take full advantage of it, or we create a new systemic risk and we do not want to go there.
Then we have the application of algorithms (‘a procedure or formula to solve a problem by conducting a series of specified actions’) to particular functions of value to business.

Publicly available published algorithms have focused in the last few years on such areas as cyber security, big data, neural networks and stock prediction, common to which are complexity, frequency and repetition and for which the generic benefits anticipated are exponentially faster processing, accelerated database queries, improved pattern recognition and new insights from accelerated machine learning.
All of which, I surmise, in the right hands could be harnessed to confer greater efficiencies, reduced risks, lower fraud, better trading decisions and smarter customer service.

And all of which will have impacts on the organisations which deploy such technology that today we can only guess at.
As to speed, quantum is not currently held out to be a general replacement for classical computing. Other than for particular classes of algorithm, whose names I won’t give here, I understand that quantum computing is expected to be no quicker than, or even slower than classical computing in the sense of elapsed time per step to produce an answer to a given question.

It just has to do exponentially fewer processing steps to get to the same answer.

So, as business people, we need first to understand which kinds of algorithm are likely to be better suited to quantum computing in order to grasp what the possibilities are and so to decide where to channel investment and skills for the future benefit of the business.

¹ ‘What is a Quantum simulator?’ Johnson, Clark and Jaksch EPJ Quantum Technology 2014
² ‘Quantum Finance Opportunities: Security and Computation’, Atos 2016
³ ‘How does a Quantum computer work? Veritasium, 2018