A global manufacturing firm discovered they were the victims of a ransomware attack that quickly spread to hundreds of their systems. They expelled their attacker and returned to business within five hours, without paying any ransom by calling Atos.

The company suffered a ransomware attack that infected over 450 of its systems in less than an hour, with a ransom of over $5 million in XBT.

Atos deployed its breach management services. These included sending an incident response team to the client site, combined with remote analysis. Atos extracted and detonated the cryptoworm behind the attack and returned the manufacturing company to operation later that day.

By partnering with Atos, this manufacturing company:

Please download the full case study by completing the form. 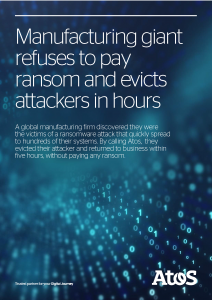