As the local IT support person for my village (I'm sure you know what I mean) I was approached on Christmas Day by one of my neighbours, who's grandson needed to get online using a new Windows 8 machine. It was an emergency; he needed to activate Football Manager 2013. 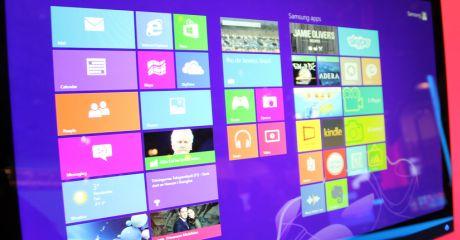 Now, as CTO, of course I've been running various pre-release versions of Windows 8 in a virtual machine for some time in readiness for any corporate implementations. So after a Bucks Fizz, with added pomegranate seeds for that extra Christmasy effect, I was able to navigate the new interface to connect to one of my WiFi access points, which was just within range of the neighbour's front room, and completed the activation without too much fuss.

This new machine had no touch capabilities, and the start screen has a significantly different user experience to previous iterations of the Operating System. So someone (that is, a normal someone, as opposed to a technically savvy Atos blog reader) who is unfamiliar with Windows 8 often[1] just doesn’t know where to start. With touch you can make small gestures in from the side of the screen to reveal menu items (now called charms) which are context sensitive. However without touch you need to know the secret of placing the mouse in the corner of the screen or the magic Windows-"C" key combination. (Or perhaps move to the slightly more familiar territory of the "traditional" desktop environment, where you'll find the network status icon to address this particular example.) It is without doubt an initial hurdle for the uninitiated.

Last year I wrote a rather high-brow paper for our clients to explain what's new with Windows 8, advise on migration strategy and introduce the license nuances of running "Companion Devices" - whether they be corporate ones or privately owned. It's something that CIOs would mostly be interested in, but at another level we do need to remember our user populations too and what their experience will be during this technology transition.

This Christmas event was the trigger for me to move to Windows 8 on my primary (BYOD) machine and properly embrace the latest Office 2013 environment. Before you do this yourselves be sure that your infrastructure can support elements such as Outlook 2013, which can only access Exchange 2007 or later (even when using the newly available Exchange Active Sync protocol in Outlook, which is a nice addition).

Perchance, I started using the latest version of OS X Mountain Lion on the same day as my Windows 8 transition, with its reversed "natural" scrolling action that messes with your head for a while. And during the reconfiguration of my machine ready for Windows 8 I remembered I needed something from it, so had to boot from an Ubuntu live CD to extract it before proceeding. All of these different technologies have their place.

So what are my lessons from this brief story?

• Support the users with their initial experience, but once they've had that little bit of help they will quickly become accustomed to the new environment and be fine on their own.

• Plan your migrations appropriately. If you're in the middle of a Windows 7 rollout there's no need to jump to Windows 8 straight away.

• Test your applications for compatibility - both those that are installed on a machine, and those accessed by the new Internet Explorer 10. There are tools available to aid in this activity.

• Microsoft, Apple, Canonical - all are options. Various drivers (compatibility, continuity, open source, cost) may push you in different directions, but increasingly users will be able to use whatever they are most comfortable with, which ensures they remain a happy, and a productive, employee.

It's interesting to follow people's early experiences with Windows 8 now that it is beginning to be actively deployed. There was quite a debate in one online forum about how to close down applications … with advice to hit the Windows key to return to the start screen, move the mouse to the top left corner, move it around a bit to bring up the list of running applications, find the application you want to close, right-click and finally select the close option. With no application menus, apparently people are beginning to forget about Alt-F4 already!