What is your future in this ultra-connected world? 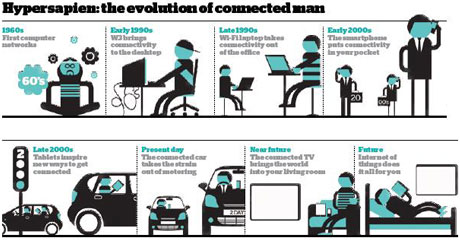 Do you sometimes feel you have become a mobile device yourself? I do!

The minute I wake up, or even while I am a sleep, I have already been active and connected in multiple ways…with my phone, with my ultra fridge, my running shoes with sensors and even my car … it feels I have shifted from sporadic interactions with a device into a constant state of connectivity with all around me, being one of the billions of connected devices in this hyperconnected world. But it will be obvious that me, you, ie. the connected humans or hypersapien, are getting in the minority of Internet users. According to industry forecasts, the number of networked, connected devices overtook the global population in 2011 and will reach 15 billion connected devices as early as 2015 (Intel‘s projection in 2009).

So what does that mean?

The outcome for our ultra-connected world might not necessarily be Big Brother, but it might not be far off either. What is certain is that I, you and the connected humans or hypersapiens are becoming the minority of internet users, will remain at the center of all this technological change. Each of the stories in the new Ascent magazine ´Promises of a converging world´ can tell us something about the world that awaits us all.

What is your future in this ultra-connected world?