What do Kevin Bacon, Paul Erdos and Ernst van Dyk have in common?

Kevin Bacon is a famous movie star, Paul Erdos is the most prolific mathematics professor of all time, and Ernst van Dyk just won another gold medal for the cycling road race at the Rio 2016 Paralympics. So what is the connection?

The Erdos Number is actually the first distance measurement like this. It was defined by Casper Goffman in 1969 in honor of Paul Erdos, the most prolific mathematician ever, having written more than 1,500 papers with over 500 collaborators. (Apparently the Bacon Number has gained more popularity because there is only a small select audience who think mathematicians have more star appeal than movie actors.) The Bacon Number and the Erdos Number are examples of the same sort of distance measurement in social networks, and some of you Linked In users are probably used to seeing it displayed in your networks.

Going a step further, you can use these distance measurements to grab on to another social networking concept, that of closeness centrality – this is the person who on average has the shortest distance to all the others in the group, so the person closest to the center of the network. Here, it’s not just distance that is important, but also the ability to “bridge” between different groups. Paul Erdos has obviously written papers with other mathematicians, but also with physicists like Albert Einstein, Computational Biologists like Lior Pachter, and Economists like Harry Markowitz. In fact, Kevin Bacon isn’t even mathematically the center of the Hollywood Universe. According to the paper Fast and Simple Computation of Top-k Closeness Centralities from some universities in Italy, in 2014 Michael Madsen was the most central actor.

I wrote earlier about how some of our data scientists are using our Atos Codex data tools to analyze some of the details of the Paralympic games. Our data contain more than 17,117 athletes competing in over 13,000 events at both the Paralympic Games and World ParaAthletics Championships, and it turns out that the Paralympics also have a similar network. Many of the athletes compete against each other in multiple kinds of events (for example 100m and 200 m swimming), and in completely different sports (for example 800m wheelchair races and wheelchair rugby). Of the 17,117 athletes 16, 517 are connected into this competition network, and the visualization of it looks like this: 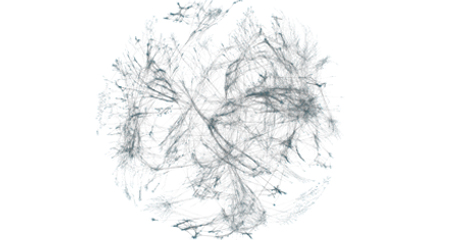 So who is the most central figure in the Paralympics Network, right in the middle of the circle? You guessed it: Ernst van Dyk. He has 2 important qualities: Not only has he been competing at the Paralympics since 1992 in Barcelona, he also bridges many groups by having competed in over 15 different types of events (including 100m backstroke S8; 100m Breaststroke SB7; 50m, 100m and 400m Freestyle swimming S8; Marathon T52, and many other T53-T54 distances).

Congratulations to Enrst van Dyk and all the other great athletes at this year’s games!

About Jordan Janeczko
View all posts by Jordan Janeczko
Cloud Strategist at Atos and member of the Scientific Community
Jordan Janeczko is the Cloud Strategist for the Global Systems Integration of Atos and a member of the Scientific Community. After graduating from the University of Illinois in Computer Science, he started working for Siemens in their software division in Vienna, Austria. While there, he has worked on many research and development topics– for example in 1992 on collaboration software projects for the European Space Agency, in 1995 on Voice over IP technologies. Staying in the area of new product development but moving to product and portfolio management, in 1999 he started working in the area of the IP-Based Multimedia Subsystem for mobile network providers. Since 2009 Jordan has been helping define and build secure cloud services and cloud integration services, and has been invited as a cloud thought leader to speak at many global cloud events. In the Scientific Community, Jordan is working on Big Data and Cloud Computing, and in GSI he is globally responsible for the cloud computing strategy.