The excitement and intensity are growing for our team which will more than double in size from 150 to 330 between now and the London 2012 Opening Ceremony. It’s a huge privilege for me and all of the team to be at the heart of the Olympic and Paralympic Games and we’ll be doing everything we can achieve our personal bests, both individually and collectively. 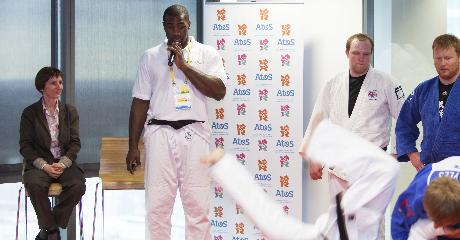 Today, we’re getting ready for three more ‘London Prepares’ test events which will see the systems tested in real Games-time conditions. The Wheelchair Rugby, Synchronised Swimming and Shooting events are getting underway, which are the 35th, 36th and 37th events in the London Prepares Series. Each test event meticulously tests the Games’ results, communications, media, sports and technology security systems, which the Atos team has so far delivered successfully together with LOCOG and the other London 2012 Technology Partners.

The London Prepares series forms part of the comprehensive testing of the IT systems ahead of London 2012 which will process 30% more information than any Games in history. The testing phase ensures that our people, the technology and our procedures are all ready to respond to any situation that could arise during the games.

We will complete the final Technical Rehearsal of the Games IT system, simulating the three busiest days of competition and by the end of the testing phase, more than 200,000 hours of meticulous testing will have been completed. Our dedicated Technology Lab has test cells for all of the Olympic and Paralympic sports and will simulate more than 9,000 test cases so they are ready to expect the unexpected

More than 14,700 athletes will compete at London 2012 and we will identify, accredit participants, manage registration, assign access privileges and provide unique access control information to more than 200,000 people. As the countdown to the Games intensifies it is key for us to draw on our experience. We’re fortunate that so many of the team have been part of the Olympic engine room since Barcelona 1992 so they know exactly what’s required to deliver London 2012. We’re ready to give it everything we’ve got, just like every Olympic and Paralympic athlete who will be at the start line in London this summer.

100 days to go and we are focussed on our final preparations. For more information, visit: atos.net/olympicgames or atos.net/london212