The techUK Gigabit Train - are we on track? 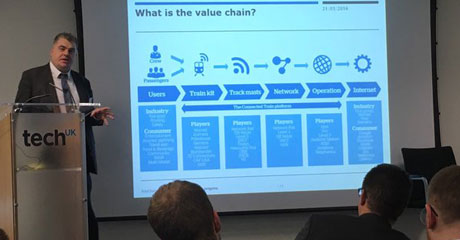 This week I was asked to participate in a techUK event titled "The Gigabit Train", as some time ago I was part of a team that published an Atos white paper called "The Connected Train". The similarity is uncanny! In the paper we presented our vision of how improved train connectivity using WiFi and the Internet will enable the introduction of new services that enrich the journey of passengers, and deliver value to those who provide services to the on-board captive market. So I thought it would be worth providing an update, based on the event.

If you want to catch up with the original vision, the paper can be found here.

We also published a brief discussion video by the authors (me included) on this Ascent content hub.

It emerged that Internet connectivity is currently available on around 20% of all passenger trains in the UK, with plans to increase it to 25% by the end of the year. So we still have some way to go before we have blanket coverage. We are also in the situation where the vast majority of onboard WiFi services are still considered premium - passengers have to pay for it. (First Class passengers do get complimentary access on some services, but they've already paid a bit of a premium!)

This is a problem, because unless you are guaranteed a reliable service (and you aren't) passengers are really reluctant to pay; and that is no surprise. Why don't you get a reliable service? Well despite onbaord WiFi train infrastructure aggregating multiple network services from different service providers, the nature of the train routes just sometimes isn't compatible! Apart from the challenges of network coverage in the wilds we have cuttings, tunnels and foliage surrounding our train routes ... which makes for a nice journey, but is a bit of a bother for radio signals.

The Government has issued an edict that all onboard WiFi services will be made available for free at the point of use (to draw a parallel with the health sector) from 2017. That's great news you would think, but despite Government funding it's really difficult to build a business case for high quality Internet services as there is a complex value chain with many players. The train operating companies (TOCs) do not actually own the trains themselves; rolling stock companies (ROSCOs) own them, and lease the trains to the TOCs. The TOCs bid for franchises which have these mandated clauses around the provision of WiFi. Some leasing companies don't like their trains having holes drilled in them by the ToCs! The whole back-haul communications infrastructure needs to be provided by network operators; and they're going to charge. The list goes on. So whilst the ToCs may be forced to provide WiFi connectivity, they don't have a compelling business reason to provide good WiFi (and by that I mean reliable, widely available and with high bandwidth to Internet services) which will require very significant investment to create the whole system.

My ultimate fear is that this is just going to be a box-ticking exercise and really we're going to be lumbered with mediocre, restricted Internet access that will be an embarrassment to the country.

How are we going to sort this out then?

Well we didn't manage to do that in a single session in central London - even with contributions from the Department of Transport, Network Rail, ATOC, Transport for London and a plethora of technology vendors and service providers. It's going to require a concerted joint effort over a period of time.

The technology world will always move forward. Satellites, GSM-R (the railway-specific GSM network), potential shared services with other national bodies (e.g. policing), existing Network Rail fibre by the tracks. 5G is all the rage at the moment and could be our saviour. But in 5 years' time we'll be talking 6G no doubt. All of these will play a part in building a sustainable solution to enable us to get our WiFi service, but with it we have a complex and evolving technical landscape. Oh, and did I mention cost?

It's not just about funding technology though, and my view is that it can't be solved wholly within the rail industry - we need to get the right partners involved who understand how to create value out of an information-based economy in what we call a multi-sided market. We need organisations that will provide revenue to the rail industry for access to passenger data that can be monetised as part of their ecosystems. Organisations that have existing Internet-based services which can be supplied on the future "Gigabit Train" can help with the provision of the infrastructure required to support their own growth. Yes, I think this will include the likes of Facebook, Google and other web giants. I don't just mean advertising though. Whilst I am sure this will be part of the story, I really want to see everyone win by developing and growing their businesses; not just by the movement of advertising revenue.

a. Netflix (and others) provide funding to the ToCs and Network Rail to support new on-board media services.

b. ROSCOs invest in on-train technology; WiFi, media servers and whatever else required.

e. Netflix gain an increase in subscriptions from passengers that wouldn't normally have time to enjoy their services.

A little simplistic, but you get the point. And there's so much more - geographic based services because we know where you're going and when you're coming back (restaurant incentives, for instance). On-board at seat services - such as food and drink ordering and delivery; increasing sales for the ToC. I do seem to have food on the brain, but it's something we all need from time to time so let's include that in the thought process about creating demand and value for these digital services.

And what is our role in all of this? Well Atos and Worldline already provide services to the railway industry and we want to help put the platform in place that will help bring all of the services together. And frankly we use the train a lot and want great Internet access too.

A note on social media

We used the #GigabitTrain hash tag during the event to try to build some buzz about the topic. We certainly seemed to do that - "RIP inbox" as they sometimes say. Some of the numbers seem quite small - only 226 tweets were sent by 62 contributors. However we reached over 227,000 people and there were over 1.5m "impressions" - many in the UK, but also with interactions in France, Italy, North America and elsewhere. @atosMike topped the retweet table, but I tip my hat to @bladesey who pipped me by a measure of influence. I'd also like to thank @bladesey and give credit for the image he posted on Twitter and we have reproduced here. More comments and photos can be found online.

techUK represents the companies and technologies that are defining today the world that we will live in tomorrow. More than 900 companies are members of techUK. Collectively they employ approximately 700,000 people, about half of all tech sector jobs in the UK. I currently sit on the techUK IoT Council. A related topic for another day.

techUK will be publishing materials on their website in due course: http://techuk.org/

Come on IT industry - let's do this. Let's get on the Intrainet Express