The Team Behind The Technology - Impressive human power

Sebastian Coe once said that no athlete wants to arrive at an Olympic Games and find a situation they haven’t prepared for in training.

It’s a phrase I often mention to colleagues, because it applies equally to our technology specialists working on Sochi 2014. From the nerve center in the Technology Operations Centre to locations far from the Olympic Park, every team member has thoroughly rehearsed their role.

They have been involved in more than 100,000 hours of meticulous testing to simulate real Games-time conditions. I know that if the unexpected happens, they are ready to respond.

This is our seventh Olympics as the IOC’s Worldwide IT Partner, and fourth Paralympics as partner of the IPC. With each edition, I never cease to be amazed at the scale of the human operation that underpins our work.

As well as the 3,000 technologists, there are also around 2,000 volunteers involved in the technology job. These unpaid staff join just before the Games. Not only do they bring fantastic skills, they also give a huge burst of energy to the team.

That word ‘team’ is crucial. We are a very diverse group with around 30 different nationalities, but we all come together with a single aim: to ensure flawless technology for three billion viewers around the world.

Here in Sochi, there are plenty of potential distractions amid the excitement and bustle of the Games environment. Yet the focus of our team is very impressive. Like athletes aiming for glory, it’s remarkable how they set all the glitter aside to concentrate on the task at hand. 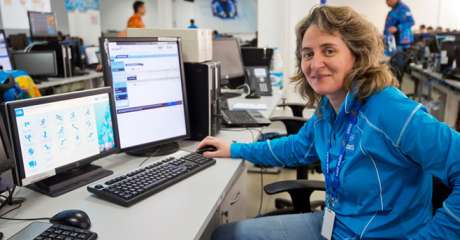 All teams have a leader, and it was great to catch up with Marta Sanfeliu, our Chief Integrator. Marta has done an amazing job building employees from Atos, the technology partners, the Sochi 2014 Organizing Committee and our volunteers into such an efficient and effective unit. Every time I meet up with our technology team it makes me feel proud and I´m fascinated how the team gets it done, again and again. Knowing there is of course a lot of stress.

You might imagine Marta suffers sleepless nights in the run-up to and during the Games. Well, I can tell you she told me she is sleeping very soundly!

That is because Marta and her team followed Seb Coe’s advice in their preparations for Sochi 2014; now they are working seamlessly together to deliver a gold medal.