The rise of the Swarm Intelligence era

Chief Architect, Distinguished Expert and member of the Scientific Community

Vice-President, Head of Machine Intelligence at Atos and member of the Scientific Community

What is Swarm Intelligence

“Swarm Intelligence is the collective behavior of decentralized, self-organized systems, natural or artificial” (Wikipedia). This concept was introduced in 1989, in the context of Cellular Robotic Systems: a self-organizing system composed of many autonomous robotic units.

In few words, Swarm Intelligence is inspired by behavior we see in nature, like a flog of birds, a school of fish, or a colony of ants. Why drawing your attention to this topic? Not just because we study nature as such. But, from a biomimetic perspective, we can ask ourselves what we can learn from animal swarms to apply this in the human or man-made domain.

1. is an open system which constantly collects context information and can adapt itself with regards to external influences to continuously achieve its objectives, thus giving the swarm a goal seeking capability - Self-configuration;

2. is able to perceive that it is not operating correctly and makes by itself the necessary adjustments as redistributing activities across members, thus giving the swarm as a whole the capability of being resilient - Self-healing;

3. adapts itself to maximize resource utilization to meet swarm needs, reconfiguring the system depending on contextual information and past trends, resulting in efficient behavior of the swarm as a whole - Self-optimization.

In addition, Swarm Intelligence system interactions involve only directly neighboring individuals. Consequently, the number of interactions tends not to grow with the overall number of individuals in the swarm: each individual's behavior is only loosely influenced by the total swarm.

Let be swarm minded, acting smarter than others

In our ultra-connected world, we should start to consider how to exploit this huge potential by developing human and digital solutions that are Swarm Intelligence based.

Swarm Intelligence involves a different way of looking at things, whether it is applied by humans or machines leveraging the capability of a group to be smarter or more powerful when thinking and acting together, than individuals would be on their own. Various schools of thought are found in both literature and in daily practice, focusing each on Swarm Intelligence from a specific angle:

1. Organizational school: swarm Intelligence principle applied in the design of organizational processes and structures, for instance to boost innovation or speed of change. They are key to attract and retain top young talents to ensure your company future, being a disrupter rather than being disrupted.

2. Algorithmic school: focusses on research and application of mathematical algorithms, which are inspired by swarm behavior in nature. They are used to solve a wide range of optimization problems for which the solution can only be found through a collaborative iterative approach at reasonable compute cost and time. It’s a great way to take good decisions faster than competition.

3. Automation school: the individuals of the Swarm here are automated devices, like robots, computers, or programs. Swarm Intelligence principles and the algorithms delivered by the algorithmic school give automated devices a certain degree of autonomy and flexibility in carrying out specific tasks. It obtains the ‘power of many’ by utilizing the features of an ultra-connected world.

It is this coincidence of trends in society, business, economy and technology that is likely to set the scene for Swarm Intelligence. This zeitgeist (spirit of the times) might be summed up by the vision statement to break-through in human organizations and in digital solutions and services.

Not convinced yet? Let’s discover in our blog series that it’s time to reap the rewards of the Swarm Intelligence promise:

· Ensure your company’s future, being a disrupter rather than being disrupted

In our next blog article we’ll explore Swarm Intelligence applied to human organizations.

Anxious and excited to hear more as of now? Read our white paper to get all you wish to know and even more. 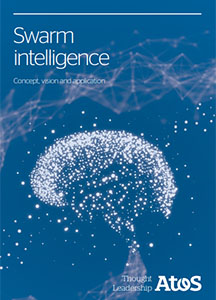 About Purshottam Purswani
View all posts by Purshottam Purswani
Chief Technology Officer, Atos Asia Pacific and member of the Scientific Community
Purshottam is a chief architect with more than 20 years cross-industry IT experience in the Telecom, Manufacturing and financial sectors. In his 20 year experience, he has fulfilled a variety of roles including Enterprise architecture, IT management, and program management. Purshottam is now responsible for the strategy and driving innovation for customers. In his role, he displays thought leadership with regard to using business technology to address the current and future challenges faced by organizations. A member of the Atos Scientific Community and part of Atos Distinguished expert, Purshottam is very passionate and works on digital technologies around IoT, Cloud, Machine Learning, Blockchain and AI. He is married with 1 child, based out of Mumbai, India.

About Do van Rijn
View all posts by Do van Rijn
Bid Executive at Atos
As a Bid Executive at the Strategic Sales Engagements team of Atos in BTN, Do van Rijn is responsible for managing bid teams with the aim to acquire new profitable business. Together with the bid team, the challenge is how to differentiate Atos positively from the rest of the pack. This requires, apart from understanding the drivers and issues of the client deeply, thinking out of the box and seeing how new paradigms, like Swarm Intelligence, can be utilized for this purpose. In other words, it is about looking for opportunities which are truly transformational to the client.

About Eric Monchalin
View all posts by Eric Monchalin
Vice-President, Head of Machine Intelligence at Atos and member of the Scientific Community
Eric Monchalin is Vice-President, Head of Machine Intelligence at Atos. He’s responsible for solidifying new technological and business directions for the Big Data and Security Global Business Line. Eric’s career has been mainly built on numerous R&D positions in several companies, with experience in leading 100+ people organizations and managing multi tens millions Euros projects in international environments. He is a technology-minded person who values wide range of skills and technological knowledge focused on customer wishes to turn them into reality.

A decade of Industry 4.0 investments: Time for review and evaluation
Frictionless Underwriting: Moving from Art to Science
Merging cloud frameworks for a sustainable digital transformation
Four steps to enhancing quality inspection on the factory floor