The right to be forgotten – Managing your on-line persona

Whilst sitting in the Manchester airport departure lounge waiting to board a plane to Paris, I thought I would pass some time by browsing the news on my smartphone. It seemed to be dominated by photographs and commentary about the violent clashes between rival football fans at the UEFA Euro 2016 championships in the city I was due to visit. The images of those caught up in events, whether by accident or design, were there for all to see – A snapshot in time with perhaps little or no context and at least in part, wide open to interpretation.

In today’s communication age, which is so heavily influenced by Social Media and on-line opinion, there is no place to hide; reputations can be made or quickly destroyed through what people interpret about us from our on-line personas. So it seemed highly pertinent that one of the reasons I was travelling to Paris was to attend to the award ceremony of the 2016 Atos IT challenge, the theme of which centred on “The Right to be forgotten”. Although the “Right to be forgotten” is an established concept in the EU, its implementation is both somewhat contentious and fraught with difficulty– How do you appropriately balance the right to privacy with the right to freedom of expression?

As a member of Atos’ Scientific Community, I had been given the honour of acting as coach for a team of highly motivated students from Loughborough University who had entered the IT Challenge with an idea that would allow users to actively manage on-line data about themselves. The team and the application they have developed went by the name “Breadcrumb”.

This was to be my second time coaching a student team, a role which basically involves helping the students crystallise their ideas into a deliverable application with a clearly defined business model. Whilst this is an extremely demanding role, I gladly offer my time as I believe it is vitally important to encourage emerging talent and get first hand insight into the way that so called “digital natives” approach the business and technology challenges that we face today.

From the outset, I was truly impressed with the team that I had been assigned. In addition to taking the approach of helping individuals to understand how content on the internet was portraying them and giving assistance to make take down requests to organisations hosting information, they also wanted to take a proactive approach to helping individuals improve the impression that their on-line persona leaves.

So how does this app work? Breadcrumb carries out various semantic searches on selected Social Media sites and the wider internet, looking for keywords and images pertaining to an individual and then undertakes the process of categorising them as Positive, Negative or Neutral. An intuitive user interface allows for refinement of the automatic classification and prompts recommended action. The App “learns” the characteristics of those items that are deemed positive and then goes on to recommend actions that can be taken to boost the positive aspects of a user’s on-line image. The net effect is cleverly presented as a ‘gamified’ kind of “on-line credit score”, so a user can track improvements, compare scores with friends and set personal targets.

In today’s increasingly digital world, employers (and the algorithms their HR departments utilise) are increasingly focusing on how the Internet portrays their prospective employees – I believe what team Breadcrumb has developed is an incredibly valuable tool for helping individuals avoid those embarrassing job interviews where less than flattering photo’s or regrettable comments are brought to light. 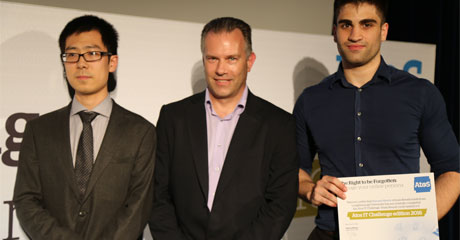 There was no such embarrassment at the IT Challenge awards as the judges announced Team Breadcrumb as the winners of this year’s closely fought final! I was really proud to have been their coach and it was great to see how all their hard work over the past 4 months or so had paid off. As you can imagine, after the announcement my Twitter feed burst into life, but these were definitely posts that were not to be forgotten! And I am sure that for my team their “Breadcrumb on-line credit score” will have shown a healthy improvement (if indeed it needed to!). I wish team Breadcrumb all the best for the remainder of their studies at Loughborough University and as they plan the next steps for the idea they have developed.

And as for next year’s Atos IT Challenge?……. well the theme will be related to Blockchain technologies and their possible impact in the whole area of security and trust. It’s an area of real interest to me and one which I am researching as part of the Scientific Community’s vision for its Journey 2020 publication.

I will certainly be volunteering my services as coach once more!

About John Hall
View all posts by John Hall
Head of Strategy & Portfolio Atos UK&I Editor in Chief for the Atos Scientific Community and member of the Scientific Community
John is a chartered Engineer with more than 30 years cross-industry IT and General Management experience in the Energy, Industry and Public Sectors. Having fulfilled a variety of roles including IT management, Programme & Account management and Operations management, John is now responsible for the strategy and governance underpinning the Atos UK&I portfolio of products and services. A member of the Atos Scientific Community, John is involved in all aspects of Innovation and thought leadership with regard to using business technology to address the current and future challenges faced by organisations . He has a particular focus on developing the strategy and go-to-market approach for digital transformation and disruptive technologies, with a particular focus on Hybrid cloud, Industrial Data Platforms, blockchain and the Gig economy. Married with 3 children, based in NW England. Enjoys rock climbing and running.