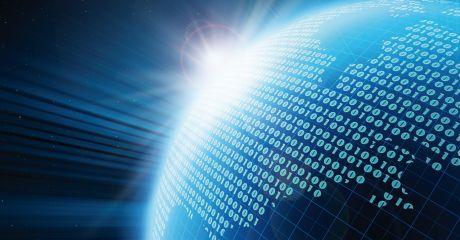 We are witnessing the greatest theft in history and few people seem to be taking note. This theft makes the great train robbery seem like a purse snatching.

Would any screenwriter have dared to supply a plot as outlandish as what is happening today? Blofeld and Scaramanga are pedestrian by comparison, even charmingly benign. What writer would have a villain say, 'Well, Mr. Bond, we are going to steal everything, every bit of information, that is contained within the minds of your government and businesses, and use that information to create your businesses here, your weapons here. It will be the greatest transfer of wealth and knowledge ever, the greatest and biggest robbery in the history of the world.' (Insert maniacal laughter).

Bond would surely laugh (suavely). ‘You're mad. You can't just cut and paste that much knowledge.' At this point the villain (perhaps petting a white cat) would laugh. 'No, not mad. Just very clever and determined.'

Today, now, 'various entities' (ranging from hackers to organizations and countries, whereby the Far East in particular is often cited in the media) are quite literally stealing data, designs, diagrams, charts, emails, facts, plans, patents. . . .everything. Intellectual property and processes that have taken literally decades to develop and refine are now being stolen in a matter of moments.

It is somewhat frustrating to see estimates for the costs of cybercrime where the calculations include things such as the time spent to reformat hard drives and the costs of employee downtime. From a business standpoint, these are important costs of course, but from a global and indeed historical perspective, these figures do not capture the scale of the problem.

Closer to the truth, I think, is this quote from the NationalJournal.com and which should be read slowly, to allow time to digest its weight: 'Computer hackers . . . have penetrated deeply into the information systems of U.S. companies and government agencies, stolen proprietary information from American executives . . . and. . . gained access to electric power plants in the United States, possibly triggering two recent and widespread blackouts in Florida and the Northeast.'

If control of the power grid falling into the wrong hands doesn’t sound like a 007 plot, I don’t know what does. Or perhaps you’d prefer a more nuclear-oriented plot. The New York Times reported in June 2012 that the USA was actively developing ‘cyber weapons’ (ie, Stuxnet) to damage Iran’s nuclear programme. Many of us may cheer such ‘peaceful’ efforts—but what will we think when similar cyberweapons are turned ourselves?

And then there’s this from 2012: Shawn Henry, [former] executive assistant director of the F.B.I. (and its lead agent on cybercrime), told Congress last week of an American company that had all of its data from a 10-year, $1 billion research program copied by hackers in one night. Gen. Keith B. Alexander, head of the military’s Cyber Command, called the continuing, rampant cybertheft “the greatest transfer of wealth in history.”

‘Transfer of wealth’ seems a bit diplomatic. A bank robbery is not a transfer of funds; it is theft.

This makes one long for a mere theft of gold from Fort Knox. Gold is heavy, its storage vaults can be defended, it needs to be transported in big, easy to find trucks. But how do you defend against theft of IP, against cyber espionage? How do you stop what you not only can't weigh but can't see? And what if the victim cannot see the theft even as it is occurring?

Yet perhaps making matters more concrete for me was the comment posted on a web site by, of all things, a fishing lure vendor who claimed that his lure business was being destroyed because foreigners were simply copying new lure designs as soon as they appeared (online) and then undercutting American vendors on price. This particular incident may be small but shows how extensive this theft is, and how it is impacting almost every conceivable corner of life--fishing lures, power stations, military weapon systems, banking transactions.

Perhaps things are beginning to change. In a very rare circumstance, at least two of the major American television news broadcasts recently led with the story that a major study found that $300 Billion worth of IP is stolen annually. Another estimate said that if such theft were prevented, about 2 Million jobs would remain within the USA.

And in this milieu the use of, and even dependence upon, the web and sites like Facebook continue to grow. Americans are upset about recent revelations that their mobile phone conversations are being recorded by the NSA (in order to track terrorists, the NSA claim). Yet the people protesting about their invasion of privacy are the same people publishing intimate details on Facebook for literally hundreds of millions of people to see. On a recent shuttle bus from a plane to a terminal I watched a middle aged man post to his Facebook account that his flight had arrived overseas and his holiday had begun. I don't think it ever entered his mind that millions of people now understood that his house (which no doubt he'd already provided pictures and address of) was uninhabited.

Over the past few years we have all been witness to a ‘i-revolution’. I mean not only the iPads and iPods and smart devices, but also the (in my opinion) rather excessive absorption if not obsession that people have in publicly sharing information about themselves, their lives and their friends. Extraordinarily little thought appears to be going into the consequences of that revolution. Far too many of us are posting personal information, family pictures, wirelessly transferring data, and storing key information on mobile devices with the apparent assumption that nothing bad can or may or will happen.

Businesses are their IP, their processes, their plans—but all this information is digitalized and accordingly more available than most people realize.

There’s a curious phenomenon when it comes to ‘things digital’: people appear to think that digital things are immune to theft, or at least they don't defend digital assets the way they do more concrete assets. We are left with this paradox: people will post highly personal information on the web but a 12 year old girl knows to put a lock on her diary.

About David Storch
View all posts by David Storch
Security Consultant IV
David Storch is a displaced American and, worse, a displaced New Yorker. He finds the customs and language of the inhabitants of the UK curious but only occasionally alarming. Unlike many of his peers, David has almost no interest in gadgets. He thinks if you have a Facebook page this is proof that you have too much time on your hands and misaligned priorities to boot. He does however have a SatNav and thinks it the greatest invention of the last few centuries. He has an MBA and is interested in the intersection of technology and ‘life improvement’, which can then be translated into business and consumer benefit. With a background in Marketing, he likes to separate real value from purported value, dissecting the facts from the fiction. He likes to think about Big Problems and Large Issues. His favourite quote of late is ‘May you live in interesting times.’ He misses good pizza.