With the Olympics upon us my personal levels of excitement are about to go through the roof. In particular Triathlon is a sport I will be watching very closely. Whilst it is a relatively new Olympic sport (introduced in Sydney 2000). On top of this team GB (sorry to be so patriotic) have a great chance of medals in both men’s and women’s events. All this thinking got me thinking about how combining 3 individual disciplines (swim, bike, run) seamlessly could teach us some lessons about the adoption of Bring Your Own Device (BYOD) schemes today. 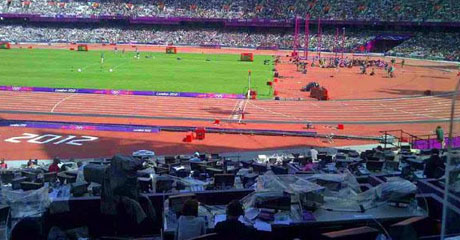 First up is the swim, your positioning and Idea phase. It is a mass start where tactics are critical, getting into the right group of swimmers is key. To me this is like the initial phase and Idea of a BYOD project. The start is frantic, with splashing, and fighting in the water to get position around the first buoy. The same is seen in BYOD conversations. Everyone has an opinion and are more than willing to share it, often with passion and vigour. Opinions are personal, sometime without direction… more splash than progress and technique (not always based on facts). Schemes that are successful are the ones that can gather information, formulate an idea and then cut through the battles effectively, but inclusively, so as not to alienate the future recipients… At times it’s can be difficult to find the direction to follow and it is the same in the swim, there are no lanes to follow in a lake, so the one who has listened, observed and plotted their course the straightest often prevails.

The transition follows the Swim, where the athletes quickly jump on their bikes and disappear off on the next leg of the event. Transitions are key and time lost here is the difference between success and failure. In a BYO implementation this is the same. The consumer world is changing so quickly, if you wait too long everything will be different and you will miss the breakaway.

The bike phase is where athletes will work together to forge breakaways and try to gain an advantage. Typically attacks only succeed through team work, individuals forging ahead alone rarely win, and it’s when athlete’s work together that capitalise and advantage is gained. The same when you define the BYOD plan for your business. It cannot be done alone by IT, nor can HR or Legal implement a solution alone, it really is a team effort from the beginning and by ensuring all factors have been covered from HR terms and conditions, finance model, legal ownership, security and technology solutions. Finally the business and the users are the strongest force in a business, make sure they are in your breakaway and are leaders in the decision and approach.

Finally the run approaches, another dash through transition, leaving bikes and collecting running shoes and they are off. This is your deploy phase. Rarely does a runner that has been left behind earlier on win the race, the selection is made from an elite group formed earlier on. To be in with a chance of success you need to be there, don’t think that missing out on defining our BYOD scheme can be fixed when it is released into the wild. Deployment needs to be simple how users enrole and begin the scheme is critical, but the smoothness of deployment is important. Too difficult and users will fall by the wayside and do their own thing, so you need to keep it simple and relaxed. The idea is right and the definition went well, you are in the right place and now you just need to deploy to win, but be prepared to change tactics at this late stage, some will slow some will surge ahead.

There you have it the BYOD triathlon, Swim, Bike, Run or Idea, Define, Deploy. Individually each discipline is critical to success, as well as the transition between them, weaknesses in a single part will be exposed and often the best overall athlete and usually a very strong runner will win. With your BYO triathlon ensure you perfect the individual steps, but ensure you are the best at deploying (the run). Small margins make the difference especially when deploying something as thought provoking as BYOD. Come on the Brownlee brothers!

About James McMahon
View all posts by James McMahon
VP, Head of Atos Digital Workplace and member of the Scientific Community
James is Head of the Atos Digital Workplace Practice boasting 10+ years’ experience of IT product management, strategy and solution architecture, targeted at enterprise customers. James is excited by developing and delivering transformational service offerings for enterprise customers, improving productivity, user experience and enabling new ways of working through cost effective services, including cloud, mobility, application & desktop virtualization, workplace as a service and BYOD solutions. Regularly meeting and working with customers (up to and including CxO level) is a key part of his role. He’s also a blogger on the Atos Ascent blog and member of the Atos Scientific Community for 5 years.