A Summer full of events. What can businesses learn from it? - Part 1

2014 is yet another busy year of sport with some big multi-sport events! Where the year kicked-off with the Sochi 2014 Olympic & Paralympic Winter Games, it was followed by a thrilling World Cup, the Commonwealth Games have just started and the Youth Olympic Games as well as the Asian Games are coming up later this summer.

But what can we all learn from these events?

There are some business projects that are large, complex, and critical to the continued success of an organization. And then there are those multi-sport events and the technology underpinning it. It is not only massive, incredibly complex and vital to the success of the events; it also has a fixed deadline and the event must be beamed to the world within half a second. No pressure, then. .

Yet, events have the same challenges every business is confronted with.

This special event series provides you with insights and learnings from running the technology of such major events. 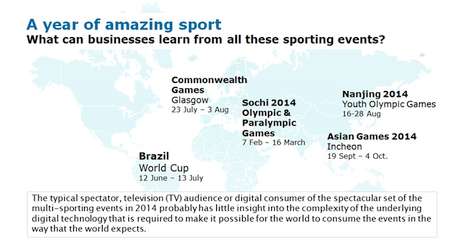 It was only as recently as the Barcelona 1992 Olympic Games that the first PC was used for recording data, but since then there has been exponential growth in use of technology. Where the Games used to be mainly 1 physical event, it now has turned into the most connected global experience ever.

Where previous generations gathered around a radio to find out who won gold, today we can stream events live on smart phones while simultaneously checking out what results are trending on Twitter. Myriad streams of data and content are available not only on TV but more and more online, not to mention on multiple devices, including smartphones, tablets and desktop computers.

In just seven years, Sochi had developed from a remote collection of Black Sea villages into a high-tech hub that was the very centre of the world for six weeks , becoming the most technologically-advanced Olympic and Paralympic Winter Games in history.

During Sochi 2014, a number of technology firsts were unveiled. One of them was the Olympic Video Player (OVP) for Olympic Broadcast Service (OBS) which provided a global service allowing users to view live streaming of all events over mobile devices, whatever their location. This player provided an immersive and collaborative user experience harnessing the convergence of 4 major trends: social interaction; mobility; cloud; and big data. It used innovative technology that gave viewers of live sporting events real-time results, statistics, biographies and social media conversations, plus a ticker of relevant upcoming events – all in one integrated screen. Content that was never shown was now at the fingertips of the fans.

The launch of this OVP was envisioned for 2016 at the Rio Summer Olympics. However several months before the start of the Sochi Games, OBS got so excited that it decided to try it in Sochi as the Games are smaller and it would be a good testing ground. The Olympic Video Player has allowed the International Olympic Committee (IOC) to broadcast the Winter Games in territories that have never experienced the Winter Olympics. The whole of Sub-Saharan Africa, the Caribbean, and the Arab world have all experienced the competition and events, making the Sochi games the first universal Winter Olympics.

It shows how technology can significantly help reduce geographic limitations, allowing people around the globe to communicate and share information and ideas.

What can businesses learn from it?

From the example above on the Olympic Video player, one can see that digitization - with the convergence of social interaction, mobility, cloud and big data, can bring possibilities and a competitive edge in your market.

In the current market context, ´everybody´ wants rich but relevant content, when they want it and where they want it. And in return you as an organization want to use the data that you have about an individual in a particular moment—because of the search term that they use, or due to the social engagement they’ve had with your company or brand—to categorize them differently and have something for each of them.

One of the best ways to start digitizing your products or services is to do that through small-scale pilots like the example of the Olympic Video Player: a small geography, a specific segment of customers—a small-scale base. Starting with a test and learn to improve things within that. So that you can understand: what are the challenges? What data do you have and what data you do not have? What is the end-user experience? Start building that insight and capability before you scale up.

If you can build those capabilities, you can then apply those to whatever digital is going to be around, and there’s always going to be new digital things!