Securing the cities of the future

Security and privacy risks associated with personal data have dominated much of the public debate around the digital revolution. But, when it comes to physical security, Big Data is likely to play an ever-greater role in keeping our communities safe. This seemingly paradoxical prediction lies at the heart of a new Atos project, developed in partnership with the City of Eindhoven in the Netherlands. The CityPulse pilot is focused on the Stratumseind, a popular drinking area in the city, which is home to more than 50 bars and clubs, regularly welcoming up to 20,000 revelers over a weekend.

The CityPulse model aggregates anonymized data from a range of ‘on the ground’ and online sources to provide meaningful indicators helping police respond to, de-escalate and predict security incidents. Big Data analytics ensure that any anomaly to what is considered a ‘normal’ data pattern can be cross-referenced against the other data sources, creating insights to inform authorities and trigger specific actions.

Paul Moore, Business Development Manager Atos UK, has helped to oversee the project for the Atos Scientific Community. He explains: “The really interesting thing is when the different sources combine, because one source is an indication, but you are not really sure. “But when you get indications from several different sources – people running, and then on social media people talking about fights and high sound levels – it is pretty clear what is going on.” While the long-term impact of CityPulse on Eindhoven’s crime figures and economy has yet to be determined, those involved with the project are confident of its long-term potential.

“We don’t have a foolproof system yet but by running this (system) over the months and years, we (will) have a better understanding of the anomalies,” says Albert Seubers, Head of Global Strategy & Business Development SmartCity at Atos. With an eye on the future that Seubers describes, Ascent took a closer look at CityPulse to see how it is helping to keep Eindhoven’s citizens – and their data – safe. 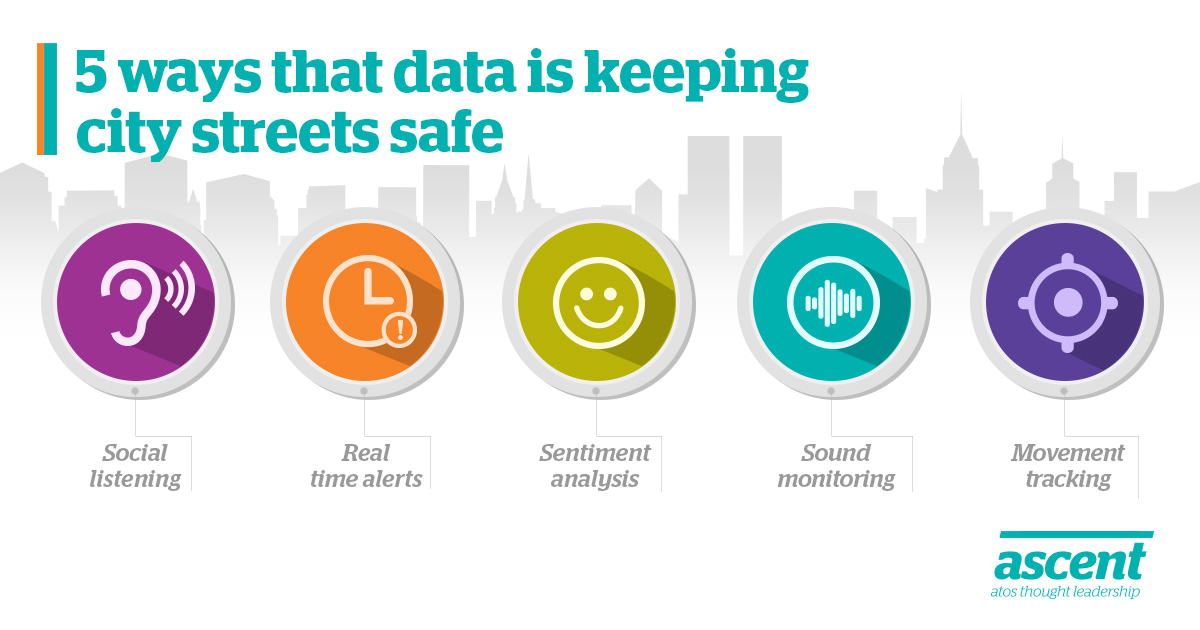 Sound levels are among the most important sources of data within the current CityPulse model. Audio sensors in participating bars and clubs detect subtle changes in the sound spectrum. Crucially, it is not only volume changes but specific sounds that can be detected: breaking glass, for example. Even the stress level in human voices can be picked up and fed into the system, where sound analysis is combined with pictures of people moving in the street to create a valuable ‘3D sound image’.

Remote cameras in five locations are used to track footfall and people movement. The main purpose is to detect specific walking patterns and therefore identify anomalies such as groups of individuals walking in circles. Data is fed in real time to the police command and control center in the city.

Beyond generic sentiment analysis, CityPulse also analyzes for specific emotions – namely ‘stress’ and ‘dangerousness’ on social media. Of all the data sources that are aggregated within the CityPulse model, social media tends to be the least accurate and so needs the greatest quantities of data to deliver meaningful sentiment results. But the system also uses keyword alerts for specific terms such as ‘pickpocket’ which can deliver valuable information from more modest data inputs.

Social media is a key source of information about expected events. Something that is worthy of investigation at 2pm on a Sunday afternoon might be entirely uninteresting at 8pm on the evening of a major soccer game, or the last day of university exams.

Once data sources confirm an incident, the CityPulse dashboard alerts the first responders in the control room allowing them to make informed decisions on any additional action that may be required, such as adapting lighting levels or increasing regular patrols.

A partnership with Tillberg University sees a graduate specialist in privacy law working with the Eindhoven project to review operations on a monthly basis from the perspective of compliance. In April 2015 the city hosted an international event focused on best practice in using media and data collected in a public space.

Audio-visual devices used in the project capture no facial detail, with all footage blurred at source. The only data that can be traced to individuals comes from publicly-available Twitter accounts. Even this information is anonymized and stored on secure servers.

While targeted improvements over coming years will bring the ability to detect individual acts, the current limitations of visual input to the CityPulse system create the potential for tampering with the aim of creating a diversion. Albert Seubers explains: “Theoretically, someone could go into the Stratumseind, do a silly dance with a bunch of people, start running from left to right. The police will respond, meaning they will be in the Stratumseind and not in another part of the city, where a crime could then be committed more easily.”

For residents of Eindhoven, the benefits of the project seems to outweigh any privacy concerns. A local community group meets regularly with the CityPulse team. “The neighbors are supportive of this as they see it as helping to control what happens on the street,” explains Paul Moore. “It is problematic for the locals sometimes. Imagine having 15,000 people drinking on the streets every weekend. Residents tend to be supportive of initiatives that help.”

Only metadata is stored over the long term. Individual data points are retained only for a very short period for the purposes of testing. To date, there have been no recorded breaches.

Analysis from CityPulse data is used only as an indicator for police and cannot form part of any prosecution case. The goal of the project is rather to give the authorities information about where they should be looking for criminal activity and evidence.

“This is not about privacy. It’s about ethics. As users of credit cards, loyalty cards and cell phones, we have all given up on privacy a long time ago. And currently, the only ones benefitting are commercial companies."

“With CityPulse, we are not identifying people. It’s the understanding of the personal data that we are sharing, by providing input to the system to create a more liveable environment, where people can feel more safe. This is a very ethical and acceptable way of using data.”

About Albert Seubers
View all posts by Albert Seubers
Director Global Strategy IT in Cities and member of the Scientific Community
Albert H Seubers (1959) graduated at Agricultural University Wageningen in 1985. Ever since he worked in IT consultancy focused on governmental topics. He worked for Dutch Telecom implementing the first fiber networks in Netherlands, for CMG as director in the Public Sector Service group, for HP as Public Sector executive before he joined Atos. Since 2011 he is Director Global Strategy IT in Cities for Atos. The Atos MyCity program focusses on the virtuous circle of managing a city on all aspects as safety, citizen services, employment, education, social and health care, transport and traffic, sustainability and governance and economics. Engaging citizens and business communities to create and maintain a sustainable, safe and prosperous city is the key message in Atos MyCity. In his role he works with cities all over the world to help them define their strategy often referred to as a Smart City Strategy or find solutions to support their strategy. Albert is a strong believer in the fact that data is enabler for successfully creating the city of the future.